For other uses, see Kernel-pult (disambiguation).

When played on the Heights: A zombie gets -1

Kernel-Pult is a colossal uncommon plant card in Plants vs. Zombies Heroes and a member of the

. It has the Team-Up trait, and its ability gives a selected zombie -1

when it is played on a heights lane. Its closest zombie counterpart is Haunting Ghost.

Its description is a reference to the jokes in many of the cards' descriptions, with the word "corny" being a pun on the fact that Kernel-Pult is a corn plant.

Its Team-Up trait is a reference to it being used as way to play Cob Cannon in Plants vs. Zombies.

If your opponent has just played a powerful 1

card like Mini-Ninja or Cuckoo Zombie, then this is the perfect card to play, with a low cost and the Team-Up trait. This can also be used to weaken other turn 1 cards like Chimney Sweep or Quickdraw Con Man so they can be destroyed more quickly. However, this isn't a great card to use late-game unless you use it to activate Cob Cannon's Evolution ability, as its stat decrease will not affect high-stat zombies as much.

Because of its Team-Up trait, you can use it to protect other plants on heights or boost it with Go-Nuts, although the latter strategy can only be used normally by Rose.

A good way to deal with this card is to play tougher zombies early on, like Arm Wrestler and Iron Boarder. Otherwise, don't play fragile turn 1 zombies against a Solar hero, as they can destroy it easily with this card. 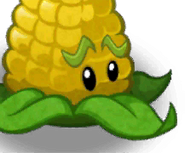 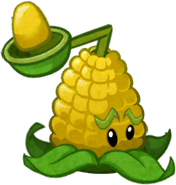 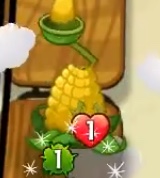 The result of the ability

Rolling Stone being played on Kernel-Pult

Nibble being played on Kernel-Pult
Add a photo to this gallery
Retrieved from "https://plantsvszombies.fandom.com/wiki/Kernel-Pult_(PvZH)?oldid=2182625"
Community content is available under CC-BY-SA unless otherwise noted.