"I'm dramatic?! Sorry to break it to you, honey, but I'm an OOOOPERA SIIINGER!" says Kalestorm. "Ah, what are those foam nubs you have there? 'Earplugs'? Why, my dear, are you putting them in?"

Rains a torrent of chilling hailstones all over the lawn.

Kalestorm was a Legendary Lobber plant in the Pre-2021 version of Plants vs. Zombies 3. She lobbed chilling hailstones at multiple targets.

Kalestorm was the last Legendary Lobber plant, and last plant in general the player obtained, being unlocked after beating Floor 32 of Devour Tower. Her seed packets are more likely to be dropped in Savings & Lawn Bank breakout levels.

She costed 10 sun and lobbed hailstones at zombies, these hailstones were able to chill zombies, slowing them down. Kalestorm was able to throw 3 hailstones at a time, each hailstone hitting the three closest targets in her lane.

Being a Legendary plant, the player could only have one of her on the lawn at a time.

Kalestorm is based on kale, also known as leaf cabbage, which is part of the Brassica oleracea family.

Kalestorm's name is a portmanteau of "kale" and "hailstorm".

Kalestorm's Plant Food ability was called Blizzard, which deals Kalestorm launched a massive amount of hailstones to various zombie targets on the lawn.

Kalestorm's Tacobility was Freezing Rain, which allowed more hailstones to be thrown at a time, as well as a chance to freeze zombies solid for a short amount of time. 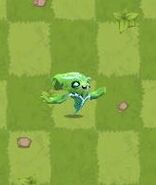