Jurassic Rockpuncher pummels plants with rocks tied to his hands.

Crushes plants with rocks tied to his hands

(Resists instant kills and does not leave a scorched tile)

(Triggers their attacks, does not leave a scorched tile)

Jurassic Marsh - Day 38
Somebody tied rocks to Jurassic Rockpuncher's hands. Being unable to remove them (because he had rocks tied to his hands), he was left with no choice but to roll with it.

Jurassic Rockpuncher is a zombie that appears in the Jurassic Marsh expansion in Plants vs. Zombies 2. He is an upgraded version of Jurassic Bully who uses the rocks tied to his hands to crush plants, destroying them instantly. This also causes the tile under the destroyed plant to become scorched, making that tile temporarily unplantable. This ability makes him an environment modifier.

Like his downgrade, he is immune to Primal Peashooter's knockback effect. He also has more than twice as much health as the Jurassic Bully.

Jurassic Rockpuncher pummels plants with rocks tied to his hands.

Somebody tied rocks to Jurassic Rockpuncher's hands. Being unable to remove them (because he had rocks tied to his hands), he was left with no choice but to roll with it.

Jurassic Rockpuncher is much more dangerous than his predecessor, Jurassic Bully, due to his increased health and ability to scorch plants that he encounters. Long-ranged attacking plants are the preferred way to handle them, especially Laser Bean, Fume-shroom or Electric Peashooter as they can target all zombies at once in their lane. You may also have to rely on Coconut Cannon or Citron to deal more damage to one. However, an easy way to get rid of this zombie is to use Grimrose or Primal Potato Mine, especially if Grimroses are powered so they can drag more zombies. Chomper and Toadstool are also a good choice as they can devour him instantly. Other instant kill plants are also great to use against them, especially against groups, although two are required to kill them. Of all the dinosaurs, pterodactyls are the most dangerous ones when combined with Jurassic Rockpunchers. They will drop them at the back of the lawn, which allows them to destroy all of your defenses in a lane unless you can get rid of them quickly, leaving the lane temporarily unplantable. However, all of the dinosaurs can make this zombie very dangerous. Use Perfume-shroom to charm dinosaurs as needed. You can also use Plant Food on plants like Primal Wall-nut to stall it like you would a Gargantuar, as Primal Wall-nut takes at least 3 smashes to be destroy, and also does not leave a scorched tile. The best counter is Banana Launcher, which can wipe him out quickly at long range by two shots. If you have Shrinking Violet, this strategy becomes easier because Banana Launcher can kill him at one shot after he is shrunk. Hot Date and Explode-o-Vine are also viable, since they will instead explode and not leave behind a crater. Chard Guard is also effective against these zombies as it can toss them back before they can have the chance to attack. Using this with Blover is an effective way of eliminating them. Guacodile and Parsnip are bad choices since they cannot rush and will be destroyed by it, although Guacodile will still sprint if planted directly on him.

Note: You can also use slowing or stalling plants like Snow Pea, Winter Melon, Cold Snapdragon, Hurrikale, Stallia, or Missile Toe to allow more time to set up your better defenses to counter this zombie properly. Hypnotized zombies are a very bad idea as they will be instantly killed by this zombie. However, Caulipower can directly hypnotize him and his smashes can easily kill zombies. Along with his high health, this makes Caulipower ideal against him. Also, avoid using Intensive Carrot since you cannot use it on a scorched tile. 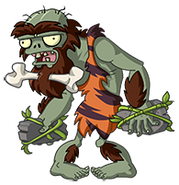 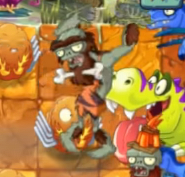 Jurassic Rockpuncher without his arm

Jurassic Rockpuncher being dragged by a pterodactyl 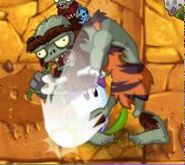 Jurassic Rockpuncher smashing a Magnifying Grass without his arm 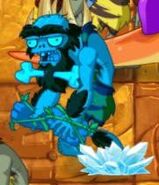 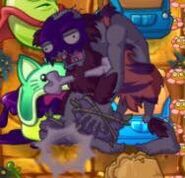 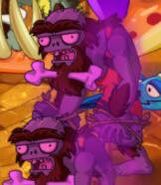 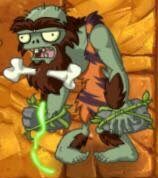 A hypnotized Jurassic Rockpuncher (can only be done by Caulipower) 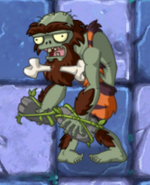 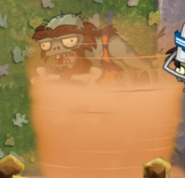