A money bag
Jurassic Marsh - Day 8 is the eighth level of Jurassic Marsh in Plants vs. Zombies 2. Perfume-shroom is pre-selected in this level to showcase it. When this level is finished for the first time, the player receives the aftermentioned plant.

This level is very similar to Day 6, with raptors and stegosauruses, but Perfume-shroom is pre-selected. Perfume-shroom provides a counter for the dinosaurs, which instantly kill zombies in different ways. However, with its recharge, it cannot be used many times, so the player must use them for whichever dinosaur will cause the most havoc. In addition, more Jurassic Imps are present, especially during final wave, most being moved by dinosaurs. Zombie waves still come in very fast, as usual in this world.

Start out by planting Sun-Shrooms and Twin Sunflowers in this format on the first lane:

SS is for the Sun-Shrooms, while TS is for the Twin Sunflowers. While preparing the main source of sun, the Conehead Zombie and the Velociraptor will come. Around this time you should have all the Sun Shrooms (as shown in the diagram above) and at least 1 Twin Sunflower. Plant a Primal Peashooter in the second row to deal with it.

When the Imps appear place Puff Shrooms to eliminate them if you still don't have enough sun for more Primal Peashooters. Once you (somehow) fill the second row with the Primal Peashooters you may either start planting Primal Wall-Nuts in the 5th row or plant Fume Shrooms in the 3rd or 4th rows.

Once the first flag has passed use Perfume Shroom to charm either one of the Velociraptors on the lawn (Imitater may help).

Eventually, by the end of the level, your lawn should look like this: 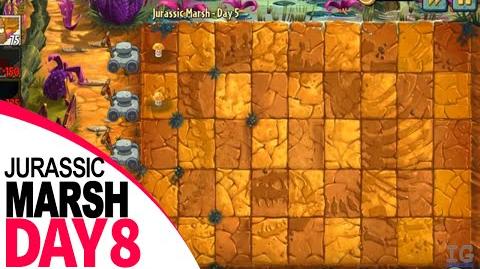 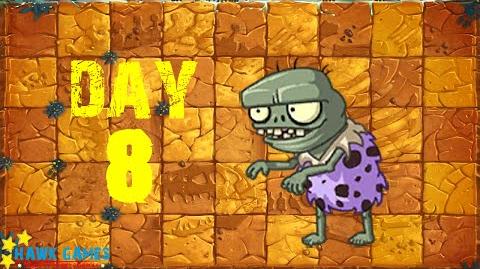 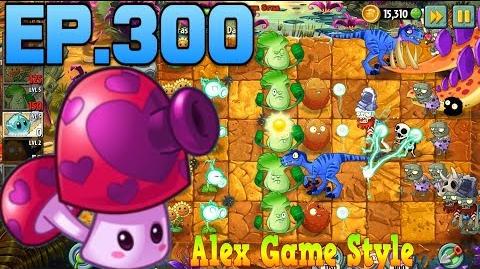 Retrieved from "https://plantsvszombies.fandom.com/wiki/Jurassic_Marsh_-_Day_8?oldid=2349470"
Community content is available under CC-BY-SA unless otherwise noted.