Don't let the zombies trample the flowers
Prior to the 7.4 update, Jurassic Marsh - Day 41 was the 41st day of Jurassic Marsh. It is a Last Stand level, where the player must protect a line of flowers. Upon completing the level, the player receives a Jurassic Marsh Piñata.

This is a difficult Last Stand level if defenses are not set up correctly. Supplied with 2500 sun and 4 Plant Foods, supplies are plentiful. However, there is an extra objective to worry about. There are flowers between the third and fourth column, and all dinosaurs appear except for stegosauruses. Raptors can kick zombies to the flower line, and pterodactyls can make zombies attack the rear and easily reach the flower line. The most dangerous dinosaur in this level is the ankylosaurus, which can push zombies to the flower line and destroy your defense line. Also, the zombies are troublesome too, especially the Jurassic Rockpuncher and Amberhead Zombie. However, luckily, this level is mostly full of Jurassic Imps, which are easy to take out. Avoid planting all around the flowers, and instead try to set up defenses head on and towards the back in the case of pterodactyls.

This strategy is super simple and will win the level with ease.

Essentially, put Primal Potato Mines on columns 5-9. Put 2 Wall-nuts on column 3, lanes 2 and 4, and Celery Stalkers in the same lane, but on column 4. This is because these lanes are the only lanes where the ankylosaurus will appear. Throughout the level, use Plant Food on Primal Potato Mines to put more on the field, giving a better chance of the zombies not being able to use the dinosaurs. If everything goes according to plan, the zombies will easily be defeated.

Well done, you beat the level.

Additional note: You can Tile Turnip two Potato Mine so every time you Plant Food one of them, they multiply by 4 instead of two, but it isn't necessary because this strategy will already make this level extremely easy. 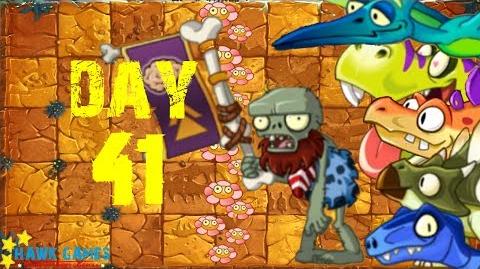 Retrieved from "https://plantsvszombies.fandom.com/wiki/Jurassic_Marsh_-_Day_41?oldid=2159611"
Community content is available under CC-BY-SA unless otherwise noted.