Survive and protect the endangered plants
Prior to the 7.4 update, Jurassic Marsh - Day 36 was the 36th day of Jurassic Marsh. The Amberhead Zombie is introduced in this level, and he is a Jurassic Zombie wearing amber on his head, which is capable of absorbing slightly more damage than a knight helm. Upon completing the level, the player receives a money bag.

For the level itself, the player must protect 3 Toadstools. The main problem is the sun limit. While the limit is generous, there are some Jurassic Gargantuars to worry about, as well as the aforementioned Amberhead Zombie. T. Rex is the only dinosaur in this level, which will make some zombies like Amberhead Zombie or Jurassic Bully very quick, eventually eating the Toadstools. 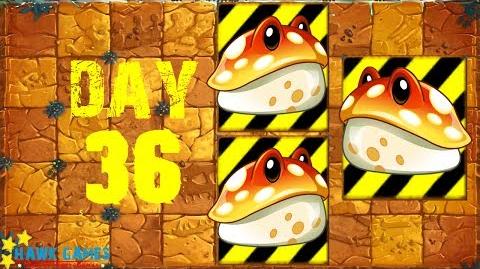 Retrieved from "https://plantsvszombies.fandom.com/wiki/Jurassic_Marsh_-_Day_36?oldid=2253976"
Community content is available under CC-BY-SA unless otherwise noted.