Unlike the other expansions, Jurassic Marsh has the lawn mowers removed by the second level. Specifically in this level, there is a plant loss limit that should be kept track on at all times. The player can lose this level if they do not pay attention to how many plants they are losing.

The plants given are lackluster at best, since the only attacking plants are Primal Peashooter and Split Pea, with Torchwood to aid them. While this seems good, zombies come in fast paired with dinosaurs, which will easily overrun defenses. Luckily, Gold Bloom is given to help the player get a good early defense, but abusing it will count as losing a plant, so he or she is forced to use it wisely. 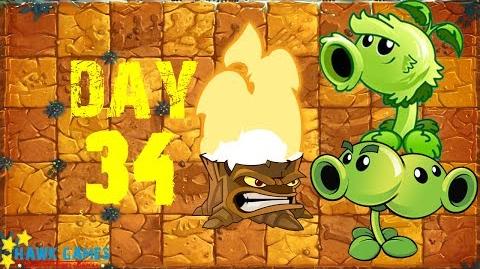 Retrieved from "https://plantsvszombies.fandom.com/wiki/Jurassic_Marsh_-_Day_34?oldid=2159603"
Community content is available under CC-BY-SA unless otherwise noted.