A money bag
Prior to the 7.4 update, Jurassic Marsh - Day 33 was the 33rd day of Jurassic Marsh. The player is introduced to the Jurassic Rally Zombie, the upgrade of Jurassic Flag Zombie, which has greater health and speed, and will lead an even greater wave of zombies. Upon completing the level, the player receives a Jurassic Marsh Piñata.

(Crazy Dave and Penny appear)
Crazy Dave: Hey! The past is still just when we left it!
Penny: True, with differences. More Jurassic zombies have appeared, with amplified abilities.
Penny: Our plants may need to be upgraded to provide sufficient protection.
(Crazy Dave and Penny leave)

This level is composed of a lot of zombies, as well as 5 Jurassic Gargantuars to defeat. A good combination of early zombie removal and heavy artillery should be used. Most dinosaurs appear in the level as well, so try and deal with them with Perfume-shroom. 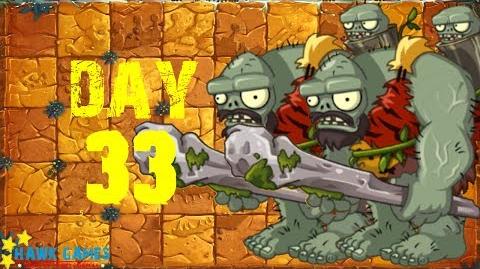 Retrieved from "https://plantsvszombies.fandom.com/wiki/Jurassic_Marsh_-_Day_33?oldid=2159613"
Community content is available under CC-BY-SA unless otherwise noted.