A money bag
Jurassic Marsh - Day 32 is the thirty-second level of Jurassic Marsh in Plants vs. Zombies 2. The player meets Dr. Zomboss in his Zombot Dinotronic Mechasaur and fights him in this level. All zombies (except Jurassic Flag Zombie) and dinosaurs appear in this boss battle. When this level is finished for the first time, the player earns the Jurassic Marsh Trophy.

(Dr. Zomboss appears)
Dr. Zomboss: My infuriation is epochal!
Dr. Zomboss: Is there nowhen I may go to avoid your imbecilic interference?
Dr. Zomboss: Stay right where you are. I have an enormous rock scheduled to make your acquaintance.
(Dr. Zomboss leaves, Crazy Dave appears)
Crazy Dave: I just hate a ticking rock!
(Crazy Dave leaves)

The main difficulty is the sheer number of dinosaurs and zombies spawned, as well as the plants given. The only offensive plants given are Primal Peashooter, Bonk Choy, and Primal Potato Mine. These alone are difficult to hit the Zombot, especially with the numerous amount of zombies that crowd this level. The first wave is manageable, with the Jurassic Imp being the main threat, as well as the raptor and stegosaurus. Next wave has the Jurassic Bully, which will act as a shield to prevent pushing back any other zombies with Primal Peashooter. In addition, if one is dragged by a pterodactyl, the player will have some difficulty disposing of it. Jurassic Fossilheads also emerge this phase, which can be difficult to defeat with the afore mentioned Jurassic Bully. The third stage is extra difficult because every time a Jurassic Gargantuar spawns, either a T. Rex or an ankylosaurus is spawned with it, greatly aiding the Jurassic Gargantuars progress across the lawn.

Unlocked on the map

Defeated on the map

No Jurassic Gargantuars spawned nor lawn mowers lost by BF10

By LegendofNickson (managed to complete the level before an ankylosaurus arrives)

By WeebishlyDone. "Don't mind the number of coins."
Add a photo to this gallery 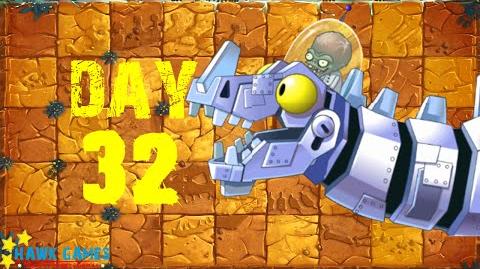 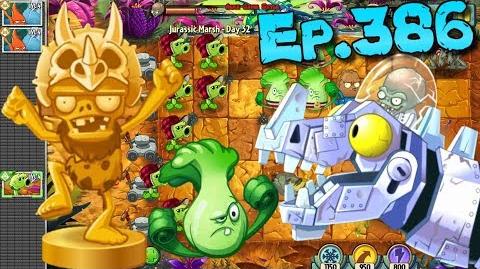 Retrieved from "https://plantsvszombies.fandom.com/wiki/Jurassic_Marsh_-_Day_32?oldid=2197723"
Community content is available under CC-BY-SA unless otherwise noted.