Same as before
Jurassic Marsh - Day 30 is the thirtieth level of Jurassic Marsh in Plants vs. Zombies 2. After completing this level, the player receives a money bag.

This level has four flags, all zombies, and some dinosaurs make this level extremely difficult. However, the zombie waves are the ideal threat. Zombies come in very quickly, along with first wave with over five zombies appearing. The player should quickly stall the first few zombies and use instants for sun production, then plan accordingly.

The first thing you will need is to get your sun production as early as possible. Plant a Chard Guard on the third lane, fourth column, and then an Aloe behind it. Kill the Jurassic Imps on the other lanes with Primal Potato Mine and stall the other with Chard Guard until you have two columns of Primal Sunflowers. In the meantime, plant other Chard Guards and Aloes on the fourth (Chard Guard) and third (Aloe) columns so you have all your defenses ready. No zombies will be able to eat the Chard Guard in time before Aloe heals it back (This goes to the rest of the level as well, just be careful with T. Rex if your Chard Guard has no leaves as the zombies will eat faster. In this case just use Wall-nut's First Aid to heal it). When the pterodactyl arrives, you must charm it instantly. If you could not charm it, use Hurrikale to make any zombie carried by a pterodactyl to go back to the last column and just walk away. Replace the second column of Primal Sunflowers with Bloomerangs.

When the second flag begins, it is a good idea to charm the raptor. A Jurassic Gargantuar will also come in the second column; use Primal Potato Mines to deal more damage to it and both Chard Guard and Hurrikale to stall it. Hurrikale is also used to make the thrown Imp either fly off-screen or go back to the beginning point.

After the second flag, a T. Rex appears. Just ignore it as Chard Guard will nullify the effect on the zombies that come near it. Keep using Primal Potato Mines if any lane has too many zombies for Aloe and Chard Guard to stall, but be sure your Perfume-shroom is charged and that you have enough sun to use it. Third flag arrives with one Jurassic Gargantuar as well as a raptor on the first lane, which you will charm so the Jurassic Gargantuar is kicked away.

Shortly before the last flag another raptor appears. Try to charm it (If needed, use Plant Food to recharge Perfume-shroom). During the last flag, another T. Rex comes, in the same lane as the Jurassic Gargantuar. You may opt to charm it but it is not necessary, as Chard Guard will once again just cause the zombies to go back to regular speed. Stall the Jurassic Gargantuar out with Chard Guard, deal extra damage with Primal Potato Mine and blow the Imp back with Hurrikale.

Use Gold Bloom to get sun at first and plant one or two columns of Primal Sunflower. When the first zombie comes, plant one or two Primal Peashooter and plant a Primal Potato Mine for other zombies. Try to plant as many Primal Peashooter as soon as possible. Keep planting Gold Bloom when it is completely recharged. When dinosaurs appear, use Perfume-shroom on pterodactyl and raptor. You can also use Plant Food to instantly recharge Perfume-shroom to plant more. When T. Rex appears, plant Primal Wall-nut in that row to prevent zombies being rush to your house. If a Jurassic Gargantuar appears in a lane with raptor, use Perfume-shroom on that lane immediately to kick out Jurassic Gargantuar. If you cannot handle zombies, use Primal Potato Mine or Cherry Bomb. Use Plant Food on Primal Potato Mine to cause a massive damage is also an excellent idea.

Strategy without using offensive plants and any Plant Food by LegendofNickson

Another strategy without using Plant Food by AwkwardShota-kun237 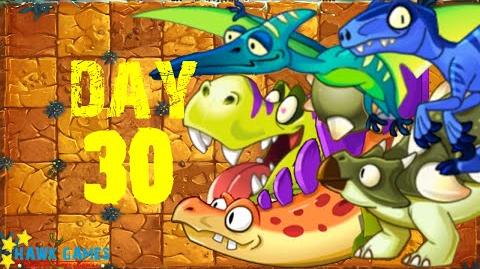 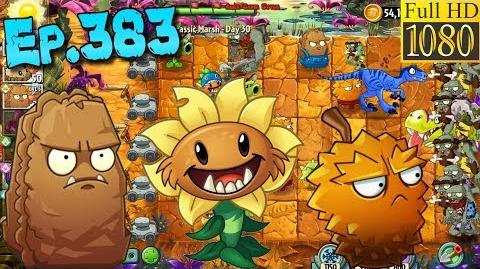 Retrieved from "https://plantsvszombies.fandom.com/wiki/Jurassic_Marsh_-_Day_30?oldid=2349612"
Community content is available under CC-BY-SA unless otherwise noted.