Same as before
Jurassic Marsh - Day 3 is the third level of Jurassic Marsh in Plants vs. Zombies 2. It is a Special Delivery level. Grapeshot, the premium plant tied with Jurassic Marsh Part 1, is showcased in this level. After completing this level, the player receives a money bag.

Grapeshot is introduced in this level, a plant which acts similarly to Cherry Bomb. The Grapeshot is the player's primary method of defeating the zombie horde. Melon-pult and Garlic are given, but they generally do not help too much, as the raptors often kick tough zombies like Jurassic Bucketheads and Jurassic Fossilheads over Garlics and deep into defenses. In addition, the player should reserve the Grapeshot for emergency situations, due to their rarity. Garlic should be used in the front rows to divert zombies away from raptors, while Melon-pults should be used as the primary offensive plant.

The player should plant Garlic in the first, third and fifth rows and on the rightmost tile on each row as raptors mostly appear on these rows only. The Garlic can move the zombies away from the raptors and this makes Grapeshot extremely effective as Grapeshot deals instant kill damage in a three by three area and shoots out eight ricocheting projectiles that can kill the zombies that were moved to the second and fourth rows effectively. The player can also dig up Melon-pults and let the zombies reach the second or third column, because more Grapeshots may appear in the conveyor-belt.

Save your Grapeshots until clumps of zombies appear; don't use them as soon as the zombies come. Save up at the start as you can get up to 6 Grapeshots in a row. Place them in strategic locations to kill most zombies and make the grapes bounce off the remaining ones.

Just like in the Jurassic Marsh Part 1 trailer! By BF10 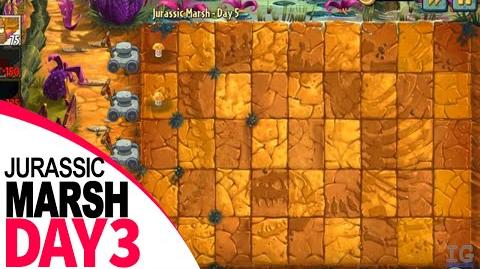 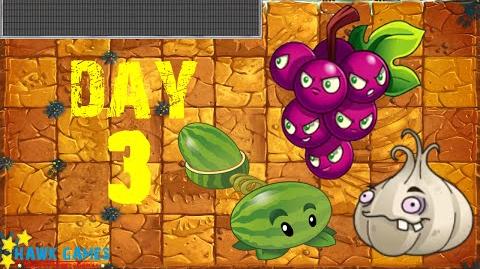 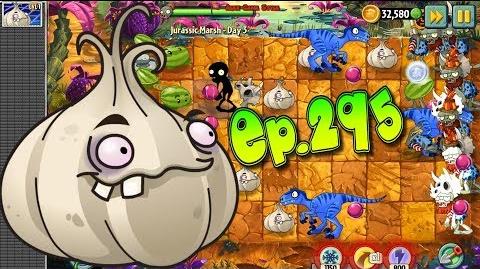 Retrieved from "https://plantsvszombies.fandom.com/wiki/Jurassic_Marsh_-_Day_3?oldid=2349465"
Community content is available under CC-BY-SA unless otherwise noted.