Same as before
Jurassic Marsh - Day 28 is the twenty-eighth level of Jurassic Marsh in Plants vs. Zombies 2. After completing this level, the player receives a money bag.

This level has a well organized zombie layout, as well as a dinosaur appearing every zombie wave. Zombies come out in large numbers, instead of quickly appearing, which is usually seen in this world. Additionally, all the dinosaurs come in order, which repeats twice. The player can follow this pattern, and build on it for a reliable strategy.

Ignore the raptor that appears in the top lane at the start and plant the first column of Primal Sunflowers. Have Celery Stalkers planted in the third column to kill the first zombie pair and any others in the top two lanes that come by. After finishing the Primal Sunflower column, get ready for a stegosaurus to appear and keep blocking the zombies behind him at the ninth column with Primal Wall-nuts until the stegosaurus leaves (add an extra Primal Potato Mine to fully secure it). A pterodactyl will eventually appear in the center lane along with a Jurassic Buckethead; charm it immediately and feed the Jurassic Buckethead with Sun Beans until the pterodactyl kills him (the sun he drops will land at the edge of the lawn). The resulting sun loot will be enough to fill up the bottom three lanes with Spikerocks. As you accrue sun, build and rearrange you plants to complete the goal setup and use Primal Potato Mines to blow up groups of zombies (feed the armored ones Sun Beans first if possible). When you get surplus sun, start adding Spikerocks in front of the Celery Stalkers. Reserve Perfume-shrooms for any future pterodactyls and the ankylosauruses that appears at the bottom lane.

If you are confused with the layout, an image of it can be seen in the gallery below by Bonkchoy 150. 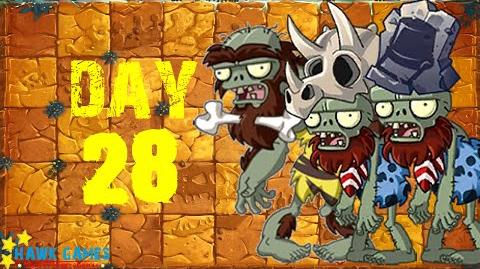 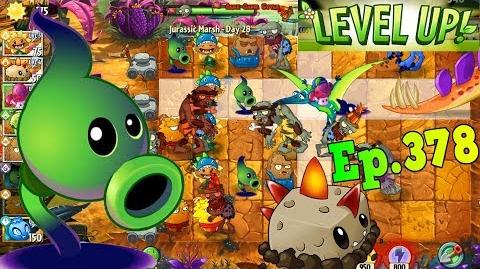 Retrieved from "https://plantsvszombies.fandom.com/wiki/Jurassic_Marsh_-_Day_28?oldid=2349610"
Community content is available under CC-BY-SA unless otherwise noted.