Plan your defenses and defeat the zombies
Jurassic Marsh - Day 27 is the twenty-seventh level of Jurassic Marsh in Plants vs. Zombies 2. It is a Last Stand level. The player is given 3000 sun to start with. After completing this level, the player receives a money bag.

Like Day 22, 3000 sun are given. However, the zombie pattern is arranged for a much different strategy than before, like pterodactyls on all lanes. Additionally, the arguably two toughest dinosaurs are the only dinosaurs present on this level. The player should notice each dinosaur present and plan accordingly. But unlike other Last Stands, this one can be pretty easy or pretty difficult depending on the player's set-up, as more sun is given than usual, giving more elaborate strategies for the player to make.

This strategy does not require Plant Food.

Plant Primal Potato Mines on the whole lawn. You can replace the blown ones with Potato Mines or Primal Potato Mines caused by both dinosaurs front or back. If you fear of these two dinosaurs ruining your defenses, you can use Perfume-shroom to prevent more trouble and Cherry Bomb against a huge group of zombies if you want to be prepared on the next upcoming wave.

Gargantuars are good on both side (Contains premium content)

Plant three column of Hypno-shrooms in the first, second and third column, then press "Let's Rock."

Zombies approaching from the front will fall pretty rapidly to the spikes. Those carried to the back by pterodactyls will be slaughtered by the Celery Stalkers. Don't worry too much about ankylosaurs, since there is plenty of room for parts of your wall to slide backward, and the Rotobagas will keep working fine if the line gets staggered.

You Shall Be Spiked, By Spikeweed! (Contains premium content) 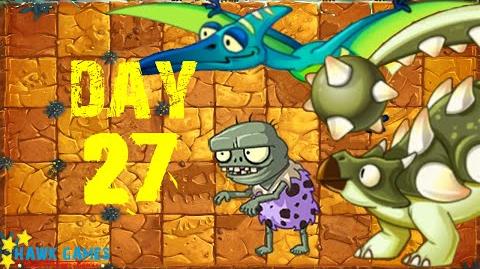 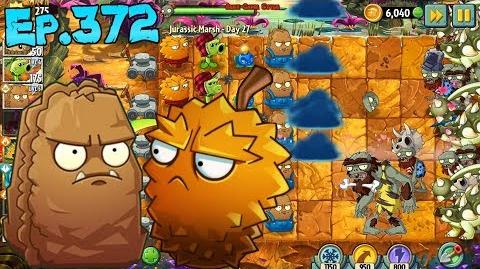 Retrieved from "https://plantsvszombies.fandom.com/wiki/Jurassic_Marsh_-_Day_27?oldid=2349609"
Community content is available under CC-BY-SA unless otherwise noted.