This level has all the dinosaurs, and the player will not realize it, since the seed selection screen only shows three. The main issue of the level, however, is the mold colonies, which prevent the player from planting on the first and second column near the house. This means zombies on these columns are very difficult to hit, unless the player selected a plant that attacks backwards or in a big radius. The main dinosaur threats of the level are the numerous raptors, the two pterodactyls that appear at the same time, and the ankylosaurus. The ankylosaurus is crucial because it can potentially push a zombie all the way to the mold colonies. Plus, it can knock plants out of the lawn by the third column. However, if the player decides to charm it with Perfume-shroom, there are still two pterodactyls that appear right after.

The goal setup is odd; all Primal Sunflowers will go only in the top and bottom lanes. The arrangement is four Primal Sunflowers, then a Tall-nut to protect them, then a Celery Stalker a tile ahead in the last column. The middle lanes will just have a Primal Wall-nut/Celery Stalker trap next to the mold colonies.

Set up your Primal Sunflower/Tall-nut/Celery lines while killing the first zombie with a Primal Potato Mine by the mold colonies. Ignore the two raptors that appear and trap all other incoming zombies in the middle lanes with Primal Wall-nuts. Zombies attacking the Primal Sunflowers will be killed off by the Celery Stalkers. When all the center area zombies have reached the Primal Wall-nuts, use either Celery Stalkers or simply blow them all up with a mine in the center lane (zombies will not eat a mine planted in their tile if they are attacking the Primal Wall-nuts). This triggers the first huge wave.

Charm the T. Rex that appears for the first huge wave, then as you accumulate sun, finish setting up Celery Stalker traps in the middle lanes and phase out the Primal Wall-nuts there for Tall-nuts. When the stegosaurus appears, spam Primal Wall-nuts in the eight column to keep the zombies away from its tail until the stegosaurus eventually leaves. Charm the ankylosaurus that appears in the top lane; if it bumps a zombie before Perfume-shroom recharges, the zombie will just land in the Celery Stalker's trap pocket. The pterodactyls can be ignored as the level will end before airdropped zombies can do much, especially if they have to eat through Tall-nuts. For the final wave, blow up the zombies by the raptors furthest from the ankylosaurus, charm any raptor that still has a lot of zombies in its lane if possible, and finish off the survivors.

The premium content and the Instant Recharge upgrade are optional for this strategy.

Note: The player will need Gold Bloom for this strategy to work.

By SaveTheLawnMower. The following pictures shows which dinosaurs to charm.

By A wiki plant 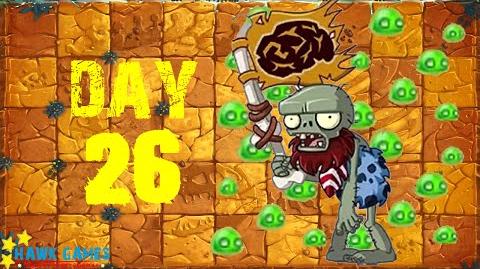 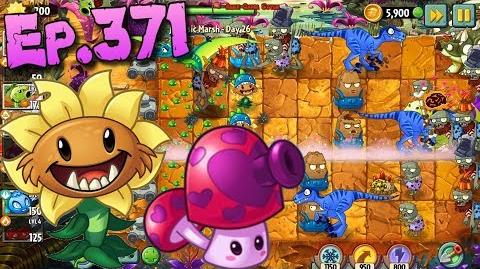 Retrieved from "https://plantsvszombies.fandom.com/wiki/Jurassic_Marsh_-_Day_26?oldid=2349608"
Community content is available under CC-BY-SA unless otherwise noted.