Same as before
Jurassic Marsh - Day 25 is the twenty-fifth level of Jurassic Marsh in Plants vs. Zombies 2. The ankylosaurus is introduced in this level. After completing this level, the player receives a money bag.

This strategy can beat the level without Plant Food or losing any lawn mowers.

Charm the second ankylosaurus that appears as soon as it does. For the rest of the ankylosaurus, until the Perfume-shroom recharges, you can stymie them by just dropping a Primal Wall-nut in the eight column and a Primal Potato Mine behind it. If Primal Wall-nut is recharging, use any other plant such as Chili Bean, Cactus, or even Primal Sunflower until it is ready. Use Chili Bean and other plants to pick off threats to them such as loose Jurassic Imps or pairs of armored zombies.

When the raptor trio appears at the end, charm one of them and blow up most of the other zombies with Cherry Bomb after they are kicked forward. Finish off the remaining zombies for the final wave. 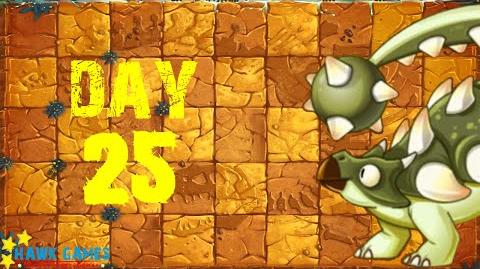 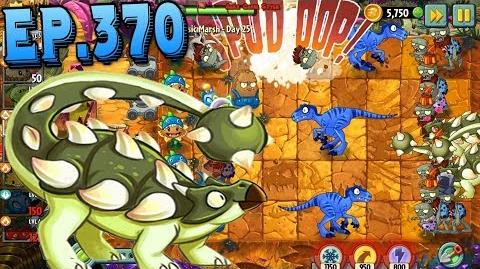 Retrieved from "https://plantsvszombies.fandom.com/wiki/Jurassic_Marsh_-_Day_25?oldid=2349607"
Community content is available under CC-BY-SA unless otherwise noted.