This level consists of all the dinosaurs met previously, as well as every zombie except Jurassic Imp and Jurassic Gargantuar. Zombies come in relatively large waves, and along with dinosaurs. The first flag appears very early in this level, so the player should make the sun production top priority. In addition, a Jurassic Buckethead is the first zombie. Stalling the zombie is a good idea, as it will leave more time to get some sun. To kill it, simply use a plant like Potato Mine, its primal counterpart, Chili Bean, etc.

The goal setup is a column of Primal Sunflowers, then Winter Melons, then Primal Wall-nuts, then a column of Celery Stalkers ahead of them, however, the initial setup will be different in the beginning.

When the first Huge Wave starts, charm the stegosaurus in the center but pin the zombies behind him with one Primal Wall-nut. By the time they get through, they will be killed and bring down more zombies with them with the pair of stegosauruses that appear later. Feed Sun Beans to tough enemies like Fossilhead Zombies and Jurassic Bullies and kill them with Celery Stalker traps to get more sun. You will quickly get enough to finish the Winter Melon column and dominate the level. If a zombie takes down a front line Sunflower, replace it with a Primal Wall-nut. Ignore the raptors, T. Rexes, and the stegosaurus pair as there is little they can do and save all future Perfume-shrooms after the first stegosaurus for the pterodactyls that appear in the top lane and then in the center lane during the final wave. If the stegosaurus pair and the raptors start burying the Primal Wall-nuts with crowds of zombies (especially the bottom raptor pair), use a Cherry Bomb to clear them out.

This strategy does not use very much skill or set up. Primarily, all you need is a row of Cold Snapdragons, behind them are two rows of Primal Sunflowers, then Chard Guards in the back to fling the zombies. Use Perfume-shrooms wisely, mostly on raptors or a T. Rexes with Jurassic Bullies or Jurassic Fossilheads in their lane. Dig up Primal Sunflowers if you get into trouble and use the Primal Peashooters as support. The Chard Guards are there to fling the zombies dropped in the back by pterodactyl into place so you can defeat the zombies without losing the back of your defense from backwards zombies. Use Power Lilies regularly or Lava Guavas when you spot stegosauruses. Always dig up leafless Chard Guards instead of Wall-nut First Aid, as you will get some sun back.

When a wave hits, use Grapeshot or Cherry Bomb to kill the zombies in lanes with dangerous dinos. Doing this strategy without the premiums is much harder, but possible. If you have Primal Wall-nuts, use them to stop fast zombies from T. Rexes. Using Hurrikale against Jurassic Bullies is the best choice. 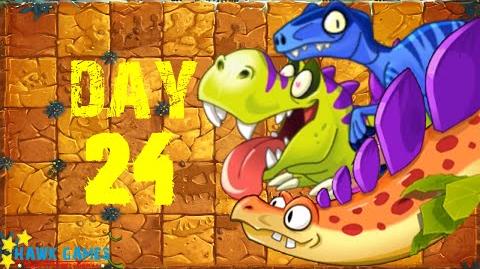 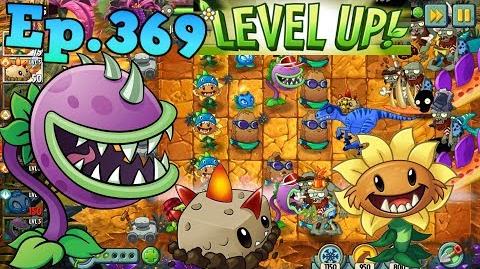 Retrieved from "https://plantsvszombies.fandom.com/wiki/Jurassic_Marsh_-_Day_24?oldid=2349606"
Community content is available under CC-BY-SA unless otherwise noted.