Plan your defenses and defeat the zombies
Jurassic Marsh - Day 22 is the twenty-second level of Jurassic Marsh in Plants vs. Zombies 2. It is a Last Stand level. 3000 sun is given to the player at the start of this level. After completing this level, the player receives a money bag.

With 3000 sun given, the player has more options than usual to plan out a defense. The player can save some sun to use Perfume-shroom to make the level easier. However, the dinosaurs attack very quickly, and the player should have a strong defense going into the level.

Plant winter melons on C1 R2 & R4, then followed with a tile turnip on each position as well too. From there, plant an entire column of Primal Peashooters on the following column (C2) and three extra ones on C3 R1, R3 & R5 (if in favour over instants instead).

Spear-Mint will help in killing the first waves of zombies before the dinosaurs can move them, and its free cost allows for there to be no subsequent risk in planting it. Throughout the day, place Winter-Mint/Appease-Mint (if you have them) to buff the Winter Melons and Primal Peas (respectively) then use your Plant Food on said Winter Melons at the final wave.

Overall, the general idea is to prevent and negate the advantages the zombies may otherwise exploit from the dinosaurs through slowing down and knocking back them further away before being given the proper chance to advance at all.

Plant one column of Potato Mines in the first column. Then plant Electric Blueberries in the next three columns. Finally plant one row Wall-nuts in the fifth column. When the Jurassic Gargantuar comes, stall him with Primal Wall-nuts until he is electrocuted. No Plant Food or lawn mower needs to be used.

Throughout the level, if the first, third, and/or fifth column looks all packed up with zombies and you seem to be in trouble, use Plant Food on the middle Red Stinger. The Power Tiles will do the rest. Also, this strategy is not guaranteed to not let you lose lawn mowers, so be prepared to plant extra Celery Stalkers or Potato Mines in the level if Raptors or Stegosauruses kick the zombies too far in your defenses.

Start the wave. Laser Bean will help kill the Jurassic Imps and Jurassic Zombies from eating the Garlic. The Chard Guard will render the pterodactyl's backward zombies useless in eating the Tall-nuts. Use Plant Food on the Tall-nuts if there are too many zombies eating it. Watch carefully when any Tall-nut develops cracks on its left side as zombies may block the view of it.

After the final wave, use Perfume-shroom on the first lane raptor with the Jurassic Gargantuar. Make sure the raptor is further away from the ninth column, or it will kick too many zombies and disappear. There will also be a pterodactyl in the fifth lane. Use a Cherry Bomb to kill the zombies in the fifth lane or Laser Bean's Plant Food ability. Finally, kill any surviving zombies with a final Cherry Bomb.

Plant Hypno-shrooms in the first column and Fire Peashooters in second and third columns. Use the Power Mints and Hurrikales if things get too rough.

A strategy comprising of Winter Melons 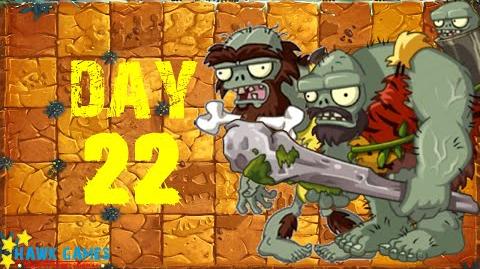 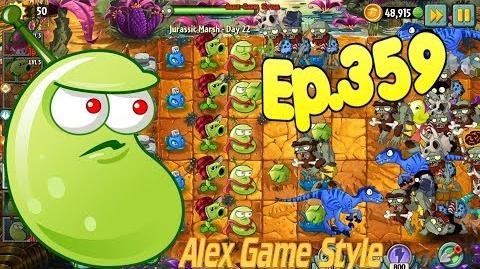 Retrieved from "https://plantsvszombies.fandom.com/wiki/Jurassic_Marsh_-_Day_22?oldid=2349604"
Community content is available under CC-BY-SA unless otherwise noted.