Unlike most worlds, this level is very difficult, rivaling the difficulty of Wild West - Day 8. Specifically, 23 raptors appear throughout the whole level, which is constant pressure since they will throw all the zombies across the player's defenses overtime. Other dinosaurs also provide pressure, but in minimal amounts. The zombies come out usually in the same type, which tends to be very dangerous, especially when huge wave of Jurassic Imps appear. The easiest way to lose this level is usually from the relentless numbers of Imps that appear after the first and second wave. The plants start being distributed at specific intervals, except for Primal Peashooter and Primal Wall-nut. The times the other plants are given usually hint at something, like using the newly acquired Perfume-shrooms on the pterodactyls that have arrived.

Around the first wave, you will get a Grapeshot, which can help get rid of groups of zombies nearing your house, while producing a fair bit of damage to other on-screen zombies from its scattered grapes. Plant this wisely because the Grapeshot rarely appears on the conveyor.

Perfume-shroom gives an advantage to your side, helping in many ways. However, since the Perfume-shroom only affects its lane but not the whole lawn, be strategic about where and when you plant it, because you may have more than one dinosaur on a lane. Affecting all in the lane can be very useful, as the pterodactyls will carry the nearest zombies away, the raptors can kick several zombies off, and the stegosauruses will deal massive damage to zombies at the back.

Be sure to keep an eye on the dinosaurs' moves to make sure no Imps shortcut their way to the three columns on the left or they can easily pass through.

By LegendofNickson (prior to 5.2.1 update) 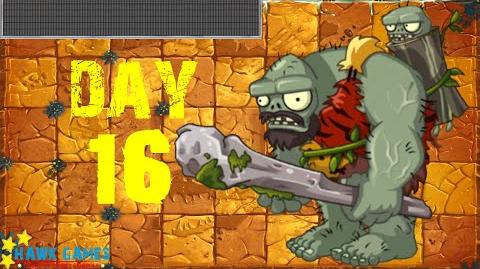 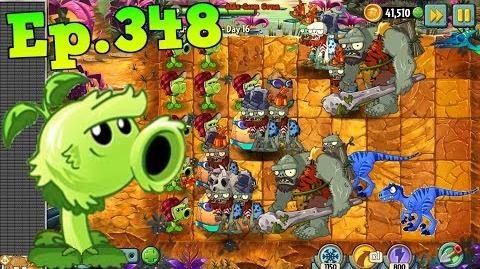 Retrieved from "https://plantsvszombies.fandom.com/wiki/Jurassic_Marsh_-_Day_16?oldid=2349479"
Community content is available under CC-BY-SA unless otherwise noted.