A money bag
Jurassic Marsh - Day 15 is the fifteenth level of Jurassic Marsh in Plants vs. Zombies 2. It is a Save Our Seeds level. The player needs to protect two Primal Wall-nuts on the fifth column. When this level is finished for the first time, the player receives a meteorite.

Like most Save Our Seeds levels, the player must protect specific plants. In this case, two Primal Wall-nuts. Unlike Neon Mixtape Tour - Day 5, the non-dynamic zombies do not start attacking the endangered plants until a wave or two pass, giving more time for sun production and for setting up their defenses.

The main threats for the endangered plants are raptors, which are constantly deployed onto those rows, as well two pterodactyls during the final wave in the fourth column. Perfume-shrooms can easily take care of the dinos in this level, but not all of them.

Other lanes should not be forgotten though, as a Jurassic Gargantuar appears in a lane without an endangered plant. However, no dinosaurs appear in that row, forcing the player to legitimately kill it, unlike before. Despite its large amount of health, using two Primal Peashooters or more can keep it at bay, as its knockback will most likely keep pushing it back, as well as the Jurassic Gargantuar's slower speed.

Dynamic Difficulty should also be taken into account; this may allow for zombies to appear on lanes with the endangered plants far earlier than normal, which can pose a huge threat.

This group will work in many of the Jurassic Marsh levels, and will work here. Drag out the beginning fights by killing the first few zombies with Chili Beans and Celery Stalkers while filling up two columns with Sun-shrooms. Celery Stalkers ideally go in the seventh column. When the raptors appear, charm them when they stand in front of the nuts, so that they do not kill the zombies too quickly. Fill up the two columns ahead of the Sun-shrooms with Snapdragons and add Tall-nuts between the endangered plants. Get rid of Jurassic Buckethead and Fossilhead with Chili Beans. If you need to keep a pterodactyl from helping the zombies until it is charmed, plant a Tall-nut in the ninth column to delay the zombies and keep it out of action. The Gargantuar is easily dealt with by letting it approach the Snapdragons, then planting a Primal Wall-nut in front of it and a Celery Stalker behind it. You can heal the Primal Wall-nut faster than it can kill it, keeping it locked in place until it is destroyed by the plants. If you use Plant Food with this strategy, the Snapdragons will wipe out everything.

At the beginning of the level, defeat the first few zombies with Celery Stalkers. Then, when you get enough sun, place some Homing Thistles to take out tougher zombies. The more Homing Thistles you put down, the better. When pterodactyls appear and drop the zombies on the left side of the lawn, use Celery Stalker to kill those backwards-facing zombies. Also, if zombies do start eating the Primal Wall-nuts, freeze them with Iceberg Lettuce and kill those while they are frozen. It is advised to use Plant Food on Iceberg Lettuce in tight situations.

Strategy without picking Primal Wall-nut in seed selection by LegendofNickson 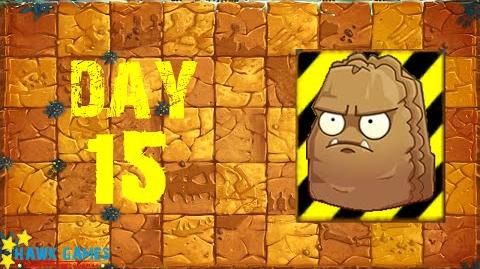 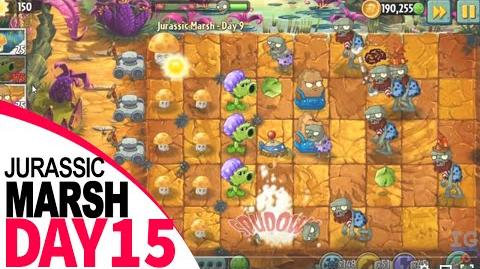 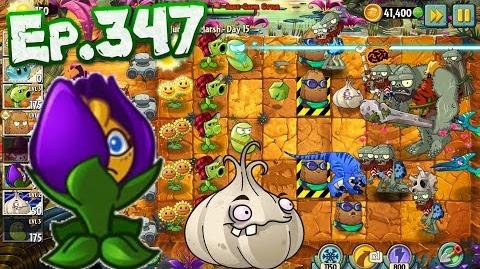 Retrieved from "https://plantsvszombies.fandom.com/wiki/Jurassic_Marsh_-_Day_15?oldid=2349478"
Community content is available under CC-BY-SA unless otherwise noted.