Same as before
Jurassic Marsh - Day 13 is the thirteenth level of Jurassic Marsh in Plants vs. Zombies 2. After completing this level, the player receives a money bag.

This level mainly focuses on the stegosaurus. However, unlike other levels, the stegosaurus is actually a formidable threat, bringing almost every zombie close to the house. There are also raptors that are present as well.

Instant plants like Cherry Bomb are great, as they can take care of the first onslaught of zombies, as well as getting rid of ammunition for the stegosaurus. Primal Wall-nut is also recommended, as its fast recharge can support early defenses.

Plant two columns of Sun-shrooms (this can be reduced to just one if you're using Primal Sunflower or Twin Sunflower). Use Perfume-shroom to charm the first stegosaurus. When the pre-flag wave comes, plant a Snapdragon or two in the fourth column. Reserve the third column for Primal Peashooter and fifth column for Primal Wall-nut.

Prioritize charming raptors, unless there's a Jurassic Fossilhead in the same lane as a stegosaurus. Use Cherry Bomb for hordes and Hurrikale or Jalapeno for zombies knocked in your defense line. No Plant Food is needed, but using it on a Sun-shroom can help you set up defenses faster.

Never have more than five plants! By Dung Dinh Anh 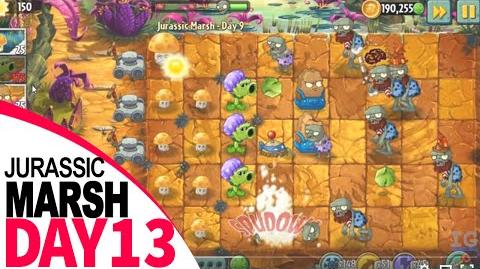 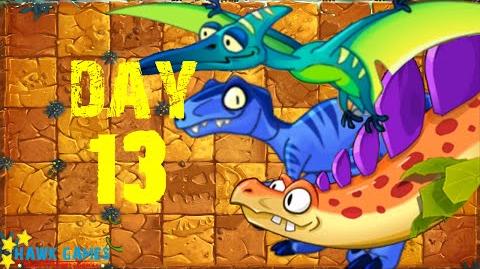 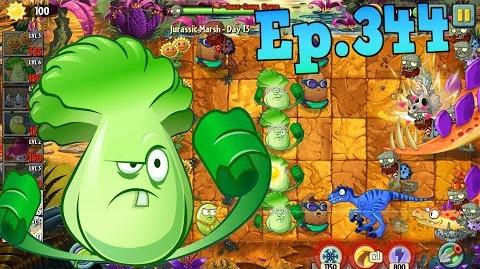 Retrieved from "https://plantsvszombies.fandom.com/wiki/Jurassic_Marsh_-_Day_13?oldid=2349476"
Community content is available under CC-BY-SA unless otherwise noted.