Same as before
Jurassic Marsh - Day 11 is the eleventh level of Jurassic Marsh in Plants vs. Zombies 2. Among all dinosaurs from Jurassic Marsh Part 1, only the pterodactyl makes its appearance in this level. After completing this level, the player receives a money bag.

Since only the pterodactyl is included in this level, this level showcases its "true power." Along with many Jurassic Imps appearing early in the level, it is very hard to get a good defense set up. Additionally, since two pterodactyls coming out at a time is occurred very often in this level, along with the fact that the player can only use one Perfume-shroom, unless the player has the Instant Recharge upgrade or imitates the Perfume-shroom, there will be a high chance that zombies carried by pterodactyls will destroy the backmost plants.

Plants that can attack backwards like Bonk Choy, Split Pea, Celery Stalker and Starfruit are ideal here, especially if the pterodactyls carry a Jurassic Buckethead or a Jurassic Fossilhead. Use Primal Wall-nut to stall the zombie horde early on, as its recharge benefits greatly.

This strategy can beat the level without Plant Food, premium content, gemium plants, or losing any mowers.

The goal is to set up two columns of Sun-shrooms, two of Snapdragons, and one of Celery Stalkers a tile ahead of them (they will perform as the main defense). Set up the Sun-shrooms and kill the first Imp with a Chili Bean while waiting for the rest of the first batch to close in. Plant your first Snapdragon in a spot that will intercept the group of Imps and zombies and use Stallia when the Imps close in, then use Celery Stalker and Primal Wall-nut to control the rest. When the two Conehead Zombies enter, delay on killing them as long as possible with Chili Beans/Celery Stalkers to build up your forces before the first Huge Wave.

After the Coneheads are down, the pterodactyls and the main zombie force will appear. Continue setting up your Snapdragon and Celery Stalker columns and charm the pterodactyls as soon as possible. If one is not charmed and has zombies entering its lane, block them off at the ninth column with Primal Wall-nuts. You can use a combo of Chili Bean > Stallia > Primal Wall-nut to keep them trapped there for so long the pterodactyl will abandon them. If a pterodactyl succeeds in moving a zombie to the front of the lawn, you have many options to deal with it (the easiest being feeding them Chili Beans).

At the start of the level, three Jurassic Imps and three Jurassic Zombies will appear. Place two Phat Beets in the second and fourth column, and if you have enough sun, place Celery Stalkers. Throughout the whole level, you should prioritize the Celery Stalkers to kill the stronger (Jurassic Fossilhead) or faster enemies, like Jurassic Imp. Perfume-shroom is not needed in this level, because when the pterodactyls make zombies act like the Prospector Zombie, Celery Stalker will take them out. Primal Wall-nut is needed in this level for defense against the tougher enemies, like Bucketheads and Jurassic Fossilheads, just in case the Phat Beet and Celery Stalker combo does not work with them. 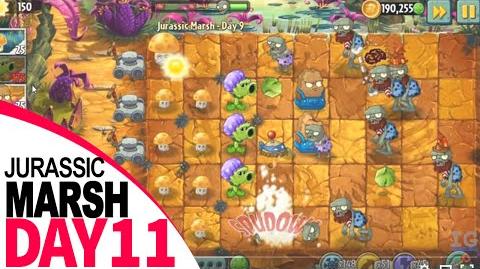 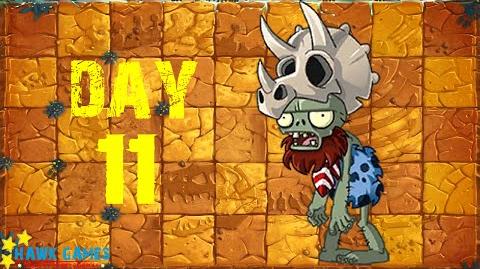 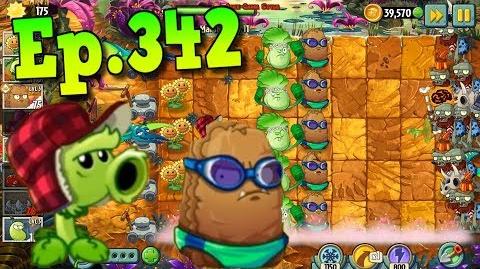 Retrieved from "https://plantsvszombies.fandom.com/wiki/Jurassic_Marsh_-_Day_11?oldid=2349474"
Community content is available under CC-BY-SA unless otherwise noted.