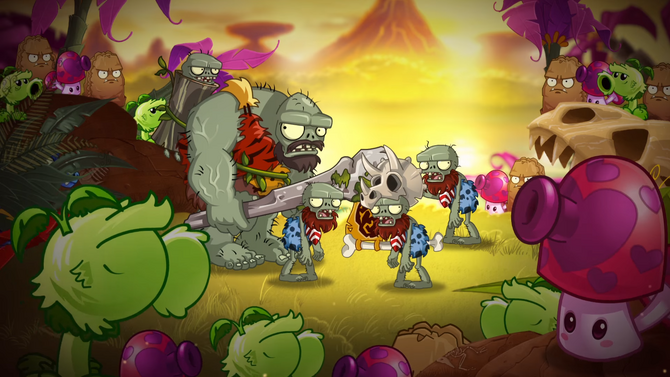 This world takes place during the Jurassic Era, long before the events of Frostbite Caves, where dinosaurs were still alive. Although the lawn is located in a marsh, water is not a relevant environment modifier in this world. However, water can be seen near the lawn.

Dinosaurs are the gimmick and environmental modifier of this world. They do not act like typical zombies and are not classified as such since there is no such interaction between the dinosaurs and plants (except between Perfume-shroom). They, however, do interact with zombies of any type that passes by them. The dinosaurs are the raptor, stegosaurus, pterodactyl, T. Rex, and ankylosaurus.

The ground thunders under the awful feet of terrible lizards! Dinosaurs prowl the past, provoking prehistoric zombies into a frenzy of ancient antipathy!

The player requires the world's key, obtainable after beating Neon Mixtape Tour - Day 32 which then gains the player access to Jurassic Marsh.

When the player beats Day 15, they obtain a small rock Penny suspects as the meteorite that destroyed the dinosaurs. The player then defeats the waves of Jurassic Gargantuars on Day 16.

On Day 32, Dr. Zomboss stated that he is irritated by the player's interference and told them to wait for the "enormous rock" he scheduled to get rid of them. Once the player defeats the Zombot Dinotronic Mechasaur, Penny detected an incoming meteor, and Crazy Dave farewell his goodbye to the dinosaurs, stating they'll be birdies in no time. Dr. Zomboss then decides that he doesn't have any other choice but to enact his Project Paradox, and flees.

Since the 7.4.1 update, this limited-time Epic Quest of 10 steps was added. It uses Jurassic Marsh days 33 to 42 as the equivalent of its 10 steps. A money bag is awarded after completing each step, and completing all 10 levels will give the player 100 gems.

La Brainsa Tarpits is Jurassic Marsh's Endless Zone and it is unlocked after completing Day 20. If the player decides to go here before completing the rest of the world, Jurassic Bully and Ankylosaurus will be encountered earlier. This Endless Zone starts you off first with Primal Peashooter, Primal Wall-nut and Primal Sunflower (instead of their modern counterparts) and Perfume-shroom. As the player progresses, more dinosaurs will appear in the level and tougher zombies will appear more often. Players consider this as one of the most difficult Endless Zones in the game because of how threatening the dinosaurs are (especially Ankylosaurus).