A weaker, smaller, much more vicious version of the typical Jurassic zombie.

(shrinks him to oblivion, killing him instantly)

(can knock him off the lawn)

Jurassic Marsh - Day 5
This nasty little nipper can make a serious dent in your defenses if left to his own devious devices.
Jurassic Imp is an Imp variant appearing in Jurassic Marsh. He is twice as fast in terms of DPS and movement speed compared to most other Imps with half the health.

A weaker, smaller, much more vicious version of the typical Jurassic zombie.

This nasty little nipper can make a serious dent in your defenses if left to his own devious devices.

Due to his offensive stats, he should not be underestimated. He often appears very early into the game and is likely to cause the loss of a level. Along with other zombies, this zombie can be very difficult to deal with. Jurassic Imps are even more dangerous when they're boosted by the T. Rex as they will behave in a similar manner to Zombie Chicken and Ice Weasel which can be very troublesome, especially when he is eating one your plants. In Modern Day, this zombie appears in many levels, usually starting an early attack in the beginning of a level, especially in groups.

Cheap plants, area of effect plants, and stalling plants are recommended to combat this zombie early. Using Gold Bloom is an excellent choice as well, so the player can easily get defenses out faster. Try using slowing plants such as Cold Snapdragon or Winter Melon. Their slowing effects will not only damage the Jurassic Imp, but it will also slow his progress to your house and his eating speed. You can also use Hurrikales as they will push them back and slow them down. If slowing plants is not the preference the player wants to use, there is also Phat Beets, Fume-shrooms, or Snapdragons. These are great to use due to the Jurassic Imp's low health and the plants' area of attack. Nightshade is also a good option, as it can kill the imp with just one leaf. Using Shrinking Violet can also instantly eliminate a horde of Jurassic Imps (Enforce-Mint targets 10 random zombies, so he's unreliable). Lava Guava can also be a good choice if he is accompanied by zombies stronger than him such as most regular Jurassic Zombies.

Another strategy is to use Blover when the Gargantuar tosses it onto the lawn or having defensive plants in the third column and some offensive plants behind them. 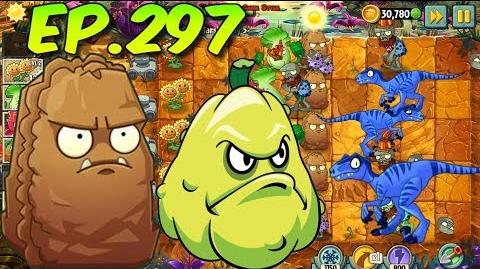 Specific to the Chinese Version  (China only)