(can directly hypnotize them)

(can blow away the Jurassic Imp)

Jurassic Gargantuar wonders how there can be zombies millions of years before the advent of humanity. He doesn't let it get in the way of his plant-bashing, though.

While Jurassic Gargantuar is significantly tougher than the average Gargantuar, his slower movement speed means that normal offensive plants will have no more problem fighting him compared to other variants. However, the trouble arises when the player decides to use instant plants: Up to three Cherry Bombs are required to defeat Jurassic Gargantuar. Therefore, even the use of Imitater will not prevent him from throwing his Jurassic Imp.

Ultimately, any strategies that worked with normal Gargantuars should also apply to Jurassic Gargantuars: Instant plants can quickly whittle him down, while slowing and stunning plants can give the defense more attacking time. Perfume-shroom can also be used to charm a raptor, allowing him to instantly kick out Jurassic Gargantuar. The player can also use a Primal Wall-nut for his resistance to instant-kill attacks, to temporarily stall him, while your other plants attack him, since he has a cheap cost of 75 sun, and a fast recharge. However, note that this may not work when they are in clusters. Plants like Primal Potato Mine are much cheaper and stronger than Cherry Bomb, thus you should try to use them instead, and, if possible, use Plant Food on Primal Potato Mine. Using Shrinking Violet is also a good option, because she will neutralize the Imp even before it is thrown, and the Gargantuar will only resist a single instant-kill. Also, note that only 2 level 2+ Primal Potato Mines are needed to defeat him.

However, Jurassic Gargantuar will be much more dangerous when aided by a T. Rex as it boosts his movement speed. It is important to use Perfume-shroom before the T. Rex roars, which causes him to chomp the zombie, destroying him quickly. Alternatively, Primal Wall-nut can be placed in front of Cold Snapdragon, as the slow effect not only eliminates the speed boost but also makes him much slower than he originally was. Since Primal Wall-nuts recharge quickly, this can literally last forever against a single one, though multiple ones will require a Perfume-Shroom. 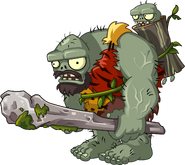 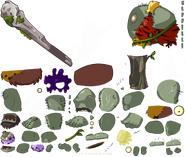 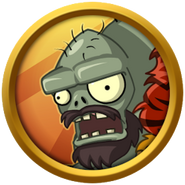 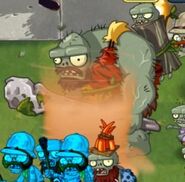 Jurassic Gargantuar on a sandstorm 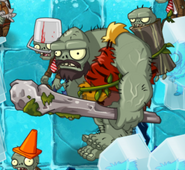 Jurassic Gargantuar in an advertisement of Mulch Madness 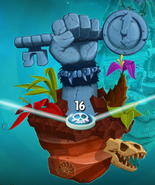 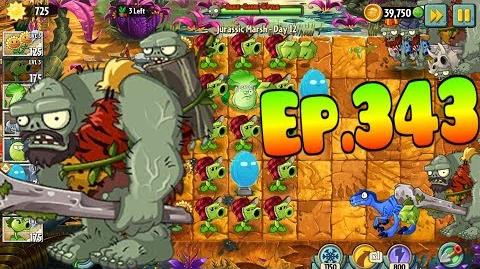