For the version in Plants vs. Zombies 2, see Jurassic Fossilhead.

Professional Evolution: This gets +2

.
For him, Fossilheading isn't just a hobby. It's a career.
Jurassic Fossilhead is a colossal super-rare zombie card in Plants vs. Zombies Heroes and a member of the

Untrickable trait, and his Professional Evolution ability gives him +2

He is based on the zombie in Plants vs. Zombies 2 with the same name and appearance. However, in this game, he holds a bone instead of not having any weapon in the origin.

His description is an allusion to his professional tribe.

For him, Fossilheading isn't just a hobby. It's a career.

Jurassic Fossilhead is a very powerful card, and even one of the best early-game plays if you set up right. He has a useful trait (Untrickable) and above-average health for a 2-cost, but what makes him stand out is his Evolution ability. He pairs well with many professional zombies, including Conehead, Flag Zombie, and even Zombie Middle Manager.

Two of the best zombies to evolve him are considerably the previously mentioned Zombie Middle Manager and Planetary Gladiator, as you can easily tempo on turn 2, making him extremely hard to deal with. Try to mulligan this card and another professional zombie that costs 1 brain at the start of the game, as you need these cards in order to perform this combo.

Boosting his stats further with cards like Camel Crossing, Vitamin Z, and Healthy Treat, and protecting him with Escape through Time are also good ideas to make him a longer threat. You can also hold him while using Stompadon and Intergalactic Warlord on the field to boost him greatly. Then, activate his Evolution and the plant hero will have a hard time dealing with him. Using Maniacal Laugh, or Going Viral can give him

Frenzy, allowing him to destroy the majority of the plant hero's defenses. You can also use Possessed, but only The Smash can do this normally.

Avoid playing him on strong zombies such as Kitchen Sink Zombie, Nurse Gargantuar, Gargantuar-Throwing Gargantuar, or Mixed-Up Gravedigger unless they are about to go down, as doing so will waste their high stats, traits, and abilities.

Jurassic Fossilhead is a pain in the neck in many aspects. He already has above average stats, but also has an Evolution ability that earns your opponent a few turns of setup, because Jurassic Fossilhead will wreak havoc unless walled in that state. Another aspect that makes him dangerous is his

However, Eyespore will, and you can play Eyespore, then another plant to instantly destroy him. Unfortunately, you will need to wait until turn 3 to do so, as Eyespore needs to be played in front of Jurassic Fossilhead and survive a turn of combat if played on turn 2, which is impossible. The only exception is if Puff-Shroom or Lil' Buddy is in your hand. Eyespore is also only accessible to solar heroes, so for others, brute force is the option.

Since he does get a bit easier to deal with if not Evolved, you cannot afford to keep a single professional alive. However, you cannot spend too much of your resources eliminating all professionals either. But whatever you do, do not let him be played with his Evolution ability activated, because if you do, it's more than likely a game over since the only single card that can stop him on turn 2 is Tater Toss, which is limited to Spudow and has a 25% chance of being the starting superpower. Primal Peashooter could Bounce him, but he will return later.

Assuming he is played without his ability activated, cards like Bonk Choy and Fire Peashooter will take care of him. But if the opposite happens, try boosting your plants with cards like Fertilize, Berry Angry, and Cro-Magnolia, or use high-strength plants like Magnifying Grass. Granted, you will lose some plants in the process.

As for other alternatives, if you are playing as a

Smarty hero, you can also Bounce him. Make sure you use either Jumping Bean, Leaf Blower, Jelly Bean, or Primal Peashooter, as Whirlwind and Spring Bean are completely useless against him. Chilly Pepper can also freeze him to stall for a turn, but Iceberg Lettuce will not work. 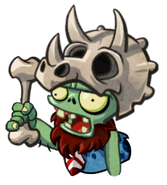 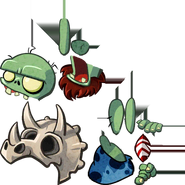 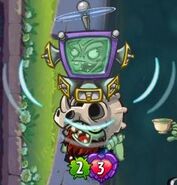 Evolved Jurassic Fossilhead on the field 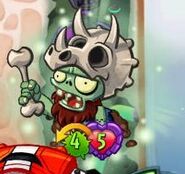 Evolved Jurassic Fossilhead with the 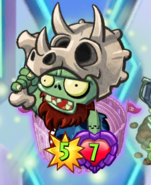 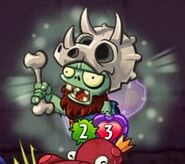 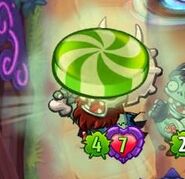