For the version in Plants vs. Zombies Heroes, see Jurassic Fossilhead.

Fossil skulls not only provide a huge amount of damage absorption, but are also extremely classy.

(pulls off fossil (China only))

Jurassic Marsh - Day 1
Contrary to his name, Jurassic Fossilhead's fossil head isn't actually a fossil. That's skull's maybe a week and a half old, tops.
Jurassic Fossilhead is a zombie encountered in Jurassic Marsh in Plants vs. Zombies 2. He has no special abilities, but his health is extremely high compared to a normal Zombie. Out of all of the zombies with Machined toughness, Jurrassic Fossilhead Zombie bears the most similarities with Blockhead Zombie, the primary difference being the latter's immunity to Iceberg Lettuce.

Jurassic Fossilhead wears a skull of a dead Triceratops that covers a little area over his head. The rest of his body and facial hair is just the same as a normal Jurassic Zombie.

Fossil skulls not only provide a huge amount of damage absorption, but are also extremely classy.

Contrary to his name, Jurassic Fossilhead's fossil head isn't actually a fossil. That skull's maybe a week and a half old, tops.

Like Knight Zombie and Blockhead Zombie, this zombie can be problematic if you do not prepare. If you see him in the seed selection, choose instant kills (such as Chili Bean, Potato Mine, a Plant Food-enhanced Sun Bean, or a Shadow-shroom) to kill him instantly. This zombie is doubly dangerous if combined with Jurassic Bucketheads, Gargantuars, and dinosaurs. Try to use a Blover quickly when he is affected by a raptor, as this zombie can cause massive havoc if you do not act fast enough. He has moderate speed but high toughness with his triceratops skull on.

Among the introduced plants in Jurassic Marsh, Primal Peashooter can help push back Jurassic Fossilhead. It is best to have at least two Primal Peashooters and a Primal Wall-nut on one lane for a great combination.

Jurassic Fossilhead in an advertisement 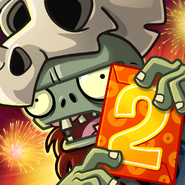 Jurassic Fossilhead on icon the v2.0.0 icon of the Chinese version of Plants Vs Zombies 2 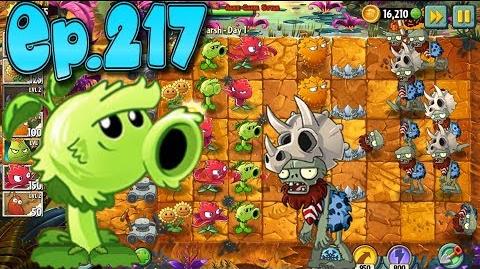