A trudging, damage-resistant zombie who is immune to Primal Peashooter's knockback.

In addition to significantly increased toughness compared to the average zombie, Jurassic Bully is immune to Primal Peashooter's knockback effect. He is not immune to Primal Peashooter's stunning effect and all other plants that can knock zombies back such as Spring Bean and Chard Guard will work properly. In Chinese version, Jurassic Bully is immune to most knockback effects.

A trudging, damage-resistant zombie who is immune to Primal Peashooter's knockback.

If you see Jurassic Bully on the seed selection, choose instant-kills so you can easily destroy a horde of them at once. Try to use Perfume-shroom on dinosaurs (such as the T. Rex), as Jurassic Bullies are very dangerous when they are assisted by dinosaurs. Magnifying Grass is the best way to kill him quickly, since he takes 2-4 shots to kill, or alternatively the Banana Launcher, which kills him on one hit. This zombie is also dangerous if combined with Jurassic Gargantuars and Jurassic Fossilheads.

Among the introduced plants, the Primal Potato Mine is the best at killing them at once in groups, even when they are affected by T. Rex's roar. Ice-Based plants come in handy to slow down their increased speed when affected by the roar.

Generally, the most dangerous thing about Jurassic Bully is the fact that if a pterodactyl carries one to the back, Primal Peashooter cannot knock him out of the reach of the plants in the back. Perfume-shroom should be used on pterodactyls as soon as possible. If a Jurassic Bully does make it to the back, Celery Stalker is usually a good choice for dealing with him. Alternatively, you can try using the Hurrikale, which pushes him forward much quicker, which allows you to simply ignore him. Additionally, since he is no different from a regular zombie aside from the increased HP, reduced speed, and KB immunity, plants like Chili Bean, Hypno-Shroom and Grimrose can also effortlessly defeat it. 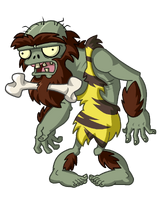 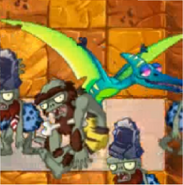 Jurassic Bully being carried away by charmed pterodactyl

Jurassic Bully without his arm 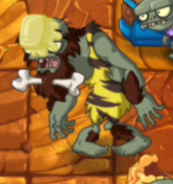 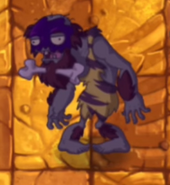 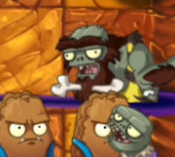 An armless Jurassic Bully getting dragged into the ground by Grimrose 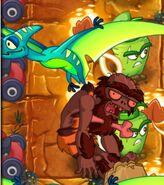 Jurassic Bully being dragged by a pterodactyl 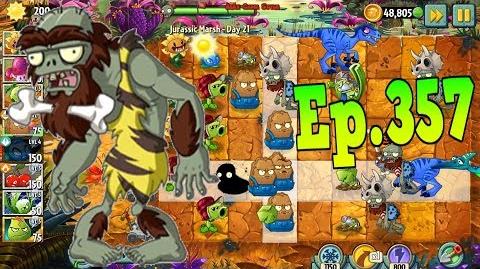