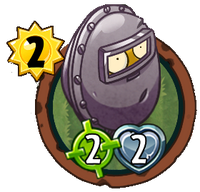 None
What's better than a Wall-Nut? A Wall-Nut in a suit of armor, that's what.
Jugger-Nut is a premium super-rare plant card in Plants vs. Zombies Heroes and a member of the

Bullseye traits and does not have any abilities. Its closest zombie counterpart is Conehead.

Its name is a portmanteau of "juggernaut," referring to its armor, and "Wall-Nut."

What's better than a Wall-Nut? A Wall-Nut in a suit of armor, that's what.

Jugger-Nut's main role is to land safe hits via

Bullseye with less worries about being destroyed if blocked by a zombie, and even if it is destroyed, it may destroy the zombie in front as well, since there aren't any zombies that cost 2 brains or less, do 3 damage at once, and can survive a hit from Jugger-Nut at the same time. Protecting it with a Wall-Nut may also be a good idea. Generally, this can be treated as Conehead but with the nut tribe and the

Boosting it with Fertilize and making it do bonus attacks with Time to Shine or Espresso Fiesta as Grass Knuckles is a great combo. This combo works especially well in the mission Super Brainz Flies Again! since you can chip away a large chunk of your opponent's health due to the special rule of that mission in which the fighter with the highest strength does a bonus attack.

It is also in the nut tribe, so it can be effective with Mirror-Nut or Smackadamia. But keep in mind that even though this seems to be similar to Wall-Nut, it does not have the Team-Up trait.

Jugger-Nut is a weak card with the

Bullseye traits, and so while it doesn't hit very hard or have much health, its traits make it harder to take care of. If the opponent manages to boost its stats, it becomes very dangerous, as it will deal high amounts of damage without charging the Super-Block Meter, due to the

Bullseye trait. Rolling Stone, Weed Spray, Electrobolt, or any zombie that does 3 damage or more can destroy it. If it gets out of control too much, use a destroying card such as Rocket Science, Locust Swarm, or Squirrel Herder.