Not to be confused with the game of the same name.

Journey to the West 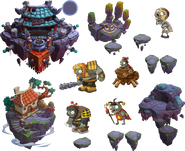 A Skeleton Demon Zombie (removed in an update)

The banner
Add a photo to this gallery

Areas
Retrieved from "https://plantsvszombies.fandom.com/wiki/Journey_to_the_West_(PvZ:_AS)?oldid=2203233"
Community content is available under CC-BY-SA unless otherwise noted.