Freeze Zombies next door.
No exaggeration, she is ALWAYS in a great mood. Even when fighting Zombies. "What's not to love about saving the world?" she says.
Jolly Holly is an event plant card in Plants vs. Zombies Heroes and a member of the

She has the Amphibious trait, and her ability gives all zombies on the lanes adjacent to her the

Freeze effect when she is played.

She was introduced in the 2016 Feastivus event alongside Regifting Zombie, and was purchasable with real-life money. She became craftable as of February 21st, 2017.

She is based on holly, a genus of evergreen or deciduous trees, shrubs, or climbers in the family Aquifolicadae.

Her name is a combination of the words "jolly," referring to her personality, and "holly," the real-life plant she is based on. She is also a reference to the song "A Holly Jolly Christmas" and makes a reference on how holly is usually associated with the Christmas season.

No exaggeration, she is ALWAYS in a great mood. Even when fighting Zombies. "What's not to love about saving the world?" she says.

Jolly Holly may be a risky plant to play. She must be played wisely, as the

Freeze effect only affects zombies in the lanes adjacent to her, not the zombie facing her. The main usage for Jolly Holly outside of freezing zombies is to quickly destroy zombies after playing Winter Squash, or to boost Snowdrop.

Jolly Holly can also be used as an offensive sniper, as she can be played on aquatic lanes. In that case, you can also choose to boost her health as Green Shadow, Citron or Beta-Carrotina. However, doing so wastes her ability, as playing it on an aquatic lane will only

Freeze one zombie, unless you are playing in a special mission.

Jolly Holly can be compared to Winter Melon in freezing more than one zombie at once. While Jolly Holly freezes zombies instantly, has the Amphibious trait and costs less, Winter Melon has more health, can

Freeze more zombies at once and also continuously, as long as it stays alive. However, Jolly Holly is slightly better at stalling zombies on the turn she is played, as Winter Melon cannot stop the attack from the left lane.

As Citron or Beta-Carrotina, it is typically better to replace this with Guacodile for an offensive plant on an aquatic lane, as it is cheaper, has better stats, and destroys any Amphibious zombie with under 9 health, so if you aren't running a

Besides, playing Jolly Holly on an aquatic lane can be worse, as her ability will only affect one lane. Nevertheless, she can at least be used as bait for hard-hitting zombies due to her low health.

Since Jolly Holly is a berry plant, she works well with Sergeant Strongberry, High-Voltage Currant, and Strawberrian if you watch her low health. However, Nightcap is the only plant hero that can naturally use this synergy.

You can also play Rescue Radish to reuse her ability, which can be useful in a pinch.

Beware, as your opponent can have this card at any time. Make sure to bring out Gravestone zombies to prevent her from freezing your zombies.

Crazy heroes are able to counter Jolly Holly with their direct damage. Conga Zombie, Nibble, and Bungee Plumber are cheap ways to destroy her since she has 1 health.

In other situations, Barrel of Deadbeards, Fireworks Zombie, and Stupid Cupid can make quick work of her. If she is boosted, play Rocket Science, Locust Swarm, or Squirrel Herder to instantly destroy her, although in Squirrel Herder's case, you need to watch out for Grave Buster if you are playing against Citron or Beta-Carrotina, or Grave Mistake against any Smarty hero.

Unless she has been boosted so much, or if she is blocking your zombies from finishing off your opponent, do not Bounce her, as she can be replayed to

Freeze even more zombies, especially when there are other plants that benefit from zombies getting the

Freeze effect such as Winter Squash and Snowdrop. 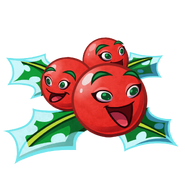 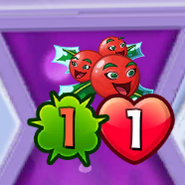 Jolly Holly with the

Jolly Holly with the

Nibble being played on Jolly Holly

Jolly Holly on the advertisement for the Feastivus Bundle

Jolly Holly on an advertisement

due to Onion Rings' ability
Community content is available under CC-BY-SA unless otherwise noted.
Advertisement