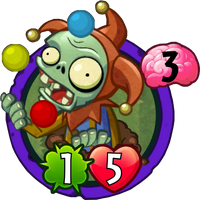 For the version in Plants vs. Zombies 2, see Jester Zombie.

When hurt: Do 2 damage to the Plant Hero.
The joke's on you!
Jester is a premium rare zombie card in Plants vs. Zombies Heroes and a member of the

. He has the Gravestone trait, and his ability does 2 damage to the plant hero every time he takes damage. His closest plant counterpart is Mirror-Nut.

He is based on the zombie in Plants vs. Zombies 2 with the same appearance and similar ability, though instead of returning projectiles, he is now juggling balls and does direct damage when hurt.

His description is a reference to the phrase, "The joke's on you," which refers to when a person tries to pull a joke on someone, only to have it backfire and affect them instead.

The joke's on you!

Due to his high health and an ability that activates when he gets hurt, the main goal for Jester is to try and give him the slowest destruction as possible so that he can make use of his ability to its highest potential. When abused properly, Jester can, in fact, inflict much more damage than any of your other zombies. He synergizes well with Flamenco Zombie due to his high health and that your opponent will avoid doing damage to it. He can pressure your opponent into not playing a weak plant against him, as he will slowly damage your opponent regardless of whether that plant is there or not. He is great to put in most plant environments, such as Spikeweed Sector and Hot Lava which damages him, or Mushroom Grotto where your opponent tends to play cheap team-up plants, Pair Pearadise and Coffee Grounds works just as fine. Due to him having the Gravestone trait as well, your opponent cannot tell if he is played until it is too late. Also, because this zombie is not as dangerous as some of the other zombies, your opponent may let their guards down and let it chip away their health until it’s too late. As Z-Mech, health-boosting tricks or abilities (such as Healthy Treat) can help Jester stay alive and make him extremely dangerous if your opponent cannot destroy him quickly. Or, you can choose to leave his stats unboosted and use Disco-Naut to make his ability damage unblockable instead, although you will be unable to use the strategy below due to Disco-Naut's low health.

Fireworks Zombie can synergize with Jester effectively, as his ability to damage every plant and zombie on the field can be used to deliberately activate Jester's ability. This combo can be improved by Barrel of Deadbeards, as it gets destroyed by Fireworks Zombie, thus causing Jester to be hurt once again. As Impfinity, In-Crypted and Mixed-Up Gravedigger can be really useful with Jester, they will reset Jester's health to 5, meaning he can take more hits. Impfinity can also boost its stats with Headstone Carver. Jester can also be substituted with Exploding Imp or Abracadaver as they all cost the same. Your opponent might not know what is actually in them and thus has a good chance of messing up their play significantly, such as using a cheap plant to block Abracadaver or Exploding Imp, only for Jester to hit them for 2 damage, or trying to take out Jester with a strong plant, only for Exploding Imp to destroy/severely damage both itself and the plant instead. You can also play him in Spikeweed Sector or Hot Lava to make him do 2 damage before combat. However, be careful with his health.

Jester is a good choice for Headhunter's evolution. Thanks to his high health and immunity to non-anti-gravestone cards, he can likely survive until turn 4. Dancing synergy also goes well with him for this reason.

Because he comes out of a gravestone, it is best to use Grave Buster to deal with him efficiently without worrying about taking damage from his ability. Target the gravestone if Grave Buster is not available at the time. Using Iceberg Lettuce or Spring Bean can help too, as they will stall for some time to get a powerful plant to attack it. Bouncing methods will set Jester's health back to 5, so take caution when bouncing him. In extreme cases where your health is low, Bounce him in order not to get yourself hurt. However, remember that while Jester can be frozen, he will still damage you when he is hit.

Outright destroying him via instant-kills like Whack-a-Zombie and Squash will not activate his ability, so try playing those cards if you have any of them.

You should not use two attacking plants such as Shroom for Two or other Team-Up plants in the same lane to hit Jester, as Jester will return 2 or 4 damage to you. Take careful actions when using direct damage cards such as Cherry Bomb and Spikeweed Sector, as Jester will do 2 damage to the you anyway.

Jester only benefits through slow destruction. A plant fighter with at least 5 strength can destroy him with ease, while only having his ability to activate once. Or to avoid more damage done to you, avoid playing a plant there. However, this strategy is risky against Impfinity; since he has many gravestones that cost 3 brains, there is no guarantee the gravestone on the field actually contains Jester.