For other uses, see Jalapeno (disambiguation).

Destroys an entire path of zombies

Jalapeño was a plant in Plants vs. Zombies Adventures. He was unlocked after reclaiming The Cafe Lot. His sun cost was lower than its counterpart from Plants vs. Zombies, costing only 100 sun. He could burn all zombies on the path. If he was planted on a crossroad, he could attack 2 paths of zombies.

He is based on the plant from Plants vs. Zombies with the (almost) same name (The n has a ~.) .

His news feed page description describes his function in this game as well as the other games he appeared in, while his Facebook page description is exactly the same as his Suburban Almanac entry in Plants vs. Zombies.

He's trying his best not to explode, but when he does, he'll take out a whole row of zombies.

"NNNNNGGGGGG!!!!!!!!" Jalapeno says. He's not going to explode, not this time. But soon. Oh, so soon. It's close. He knows it, he can feel it, his whole life's been leading up to this moment.

The player got the Jalapeño

Jalapeño about to explode 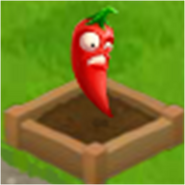 Jalapeño in a Planter Box

Jalapeño is ready to be harvested 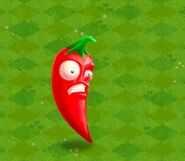 A Jalapeño being shot out of a Bamboo Shoot (glitch)