Formed from ancient, mystical rock, the Jade Cactus slumbers deep beneath the desert. Legends speak of a stoic, green guardian who would return to us, in a time of great need. Can she save us from Dr. Zomboss' schemes? Where exactly did she get that cool armor? Did Crazy Dave make the whole thing up? Only time will tell.

Jade Cactus' armor plating gives her extra health at the expense of speed. 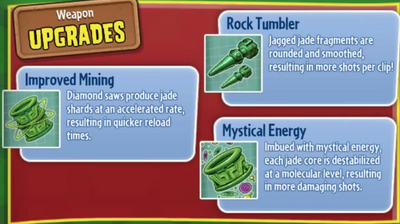 Jagged jade fragments are rounded and smoothed, resulting in more shots per clip!

Imbued with mystical energy, each jade core is destabilized at a molecular level, resulting in more damaging shots.

The Jade Cactus is useful for players who like to take on the role of "counter-sniping." That is done by shooting down any zombies that are attacking your teammates from a high vantage point like a cliff or a rooftop this can deal some good damage to the enemy. The extra 25 health is useful as even if you do happen to get shot at, you are less likely to die to enemy fire, allowing you to duck behind cover to recover health. The Iron Maiden is good for this purpose as it allows you to create a semi-solid object to duck behind if there is nothing else available. The Jade Cactus may be tougher but she moves even slower than before, meaning if you get caught in an enemy's line of fire and there is no cover to get behind, you are likely going to die unless you can kill the attacking enemy. The Jade Cactus is less useful when sniping near the front-lines as the 25 extra health does not offer much of an advantage, and the Jade Cactus' even slower foot speed will put you at a disadvantage against speedier opponents. Because of this, it is important to learn how to use your abilities to escape such situations, and camouflaging yourself to avoid altercations. Though she is a cactus she doesn't have very good damage falloff, so it's overall more beneficial to attack closer-ranged targets, which is aided by her weapon having good accuracy while not zoomed in. She is best played on defense as her higher health allows her to hold ground better.

The explosive needles (and the splash damage that comes with them) on the other hand have many uses. The splash damage allows you to deal damage around corners (allowing you to attack something that you would normally not be able to) in addition to allowing you to attack zombies that are hiding behind cover. The splash damage also allows you to "check" around corners to see if there is something there. Shoot at the ground near the object and wait for the needle to explode. If it deals damage, then there is something behind the object, if you keep shooting needles at the ground near the object you may (if it is a zombie player) eventually force the zombie to reveal himself (as otherwise it will die if it does not have an escape route).

This Cactus also has excellent camouflage capabilities due to her coloration. The dark green color can blend in well with certain foliage or shadowy areas. If a player finds the correct place and applies appropriate customization (such as a dark colored tattoo, non-glowing hats, etc.), enemies will have a hard time finding you. Take advantage of the Cactus's long-ranged capabilities and try to be as far from the main fight as possible. Memorize the best places to do this in as many maps as possible, especially those in Turf Takeover. This camouflage is most effective against distracted, far-off targets, and can be used very effectively in objective-based modes. However, do note that when in hiding you may be too focused on your front and could be ambushed from other sides, becoming vanquished faster than you can get away. Always be aware of your surroundings, or be sure you are well protected behind and around you by using your nut barricades and Potato Mines. 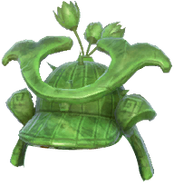 Jade Cactus on the Legends of the Lawn Pack

Jade Cactus on the Legends of the Lawn billboard image 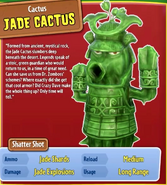 Jade Cactus in the character-select screen 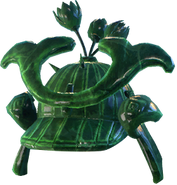 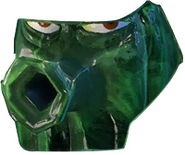 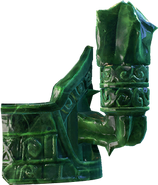 Jade Cactus in the customization booth

Français
Community content is available under CC-BY-SA unless otherwise noted.