Plants vs. Zombies Wiki
Register
Don't have an account?
Sign In
Advertisement
in: China exclusive, Articles with conjectural titles, Archived,
and 8 more
English

I need my TIME MACHINE!
Iron Man Nut is a conjectural name for this article.
If you know the official name or have a better name or
translation for it, please contact a wiki administrator to change it.

Level 1-3
Iron Man Nut (坚果钢铁侠; pinyin: jiānguǒ gāngtiěxiá) is a plant in Plants vs. Zombies: Journey to the West. It is one of the Heroes introduced in the game. It fires energy balls and shot lasers at zombies, which could sometimes deal critical damage.

Iron Man Nut is based on a Wall-nut and famous Marvel superhero Iron Man, the alias of genius billionaire playboy scientist Tony Stark, who fights crime in a mechanized full-body suit designed and built by himself, specifically inspired on Iron Man's Mark 1 V2 suit, which has a prominent gold hue across it. The light blue chest piece on Iron Man Nut is taken from the newer iterations of Tony's armor when Iron Man's Arc Reacrtor turns cyan and gains the abilty to shoot a large blast out of it. 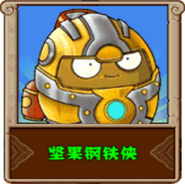 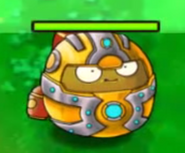 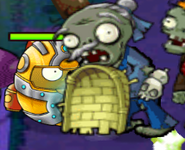