Super Rare
Encased in iron armor, these Iron Maiden Tallnuts will stare at Zombies with an unmatched intensity. They are very hard to destroy and enjoy getting in the way.

The difference between the abilities is that it is smaller, but it is stronger with the health of 450. The only way to obtain this ability is buying sticker packs. It takes 30 seconds to recharge.

Only four Iron Maidens can be placed at a time and the oldest one will be removed if the player attempts to place a fifth one. Like most of the other alternate abilities, it was introduced in the Garden Variety DLC.

Iron Maiden is based off of Wall-nut's Plant Food effect from Plants vs. Zombies 2, where he gets encased in an iron shell which increases his health and the amount of damage he can withstand.

Its name comes from an infamous historical torture device from the 18th century which consists of an iron cabinet just like this Wall-nut's iron plating and spiky interior to torture the victim placed inside. Its name could also be derived from the English heavy metal band of the same name.

Encased in iron armor, these Iron Maiden Tallnuts will stare at Zombies with an unmatched intensity. They are very hard to destroy and enjoy getting in the way.

This Tallnut is encased in solid bling gold armor! How did a Tallnut even afford such expensive armor though?

As this can withstand more damage but has a smaller hitbox, Iron Maiden is more useful than the Tallnut Battlement at blocking narrow corridors. 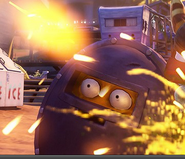 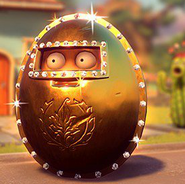 Bling Maiden in the Backyard Battleground