.
Working for a Huge-Gigantacus isn't the worst job he's ever had. It comes with a 401Z plan, which is more than what most Zombie employers offer.
Iron Boarder is a super-rare zombie superpower card in Plants vs. Zombies Heroes and a member of the

Bullseye trait, and his ability gives him +1

while he is in an environment. His closest plant counterpart is Plantern.

He is based on an ironing board, a small foldable table with a heat-resisatant surface, and the Silver Surfer, a fictional character appearing in American comic books published by Marvel Comics.

His name is a portmanteau of "iron board," the real-life object he is based on, and "Silver Surfer," the fictional character he is based on.

The 401Z plan mentioned in his description is a reference to a 401(k) plan, which is the tax-qualified, defined-contribution pension account defined in subsection 401(k) of the Internal Revenue Code.

Working for a Huge-Gigantacus isn't the worst job he's ever had. It comes with a 401Z plan, which is more than what most Zombie employers offer.

This zombie essentially acts like Plantern, but he has

Bullseye in any lane and has 1

less than Plantern. But since this is a superpower and costs 1

, you can play this early to do unblockable damage right away, then play environments like Laser Base Alpha or Teleportation Station on his lane to power him up.

Since he is an Imp zombie, he benefits from Imp Commander and Toxic Waste Imp. However, he cannot synergize with Team Mascot or Zombie Coach unless Huge-Gigantacus gets Team Mascot from Interdimensional Zombie, Triplication, Transformation Station, Evolutionary Leap or Portal Technician because he doesn't lead the

Hearty class. Another way to do this is if Rustbolt gets him through Thinking Cap or Z-Mech via Quasar Wizard, then plays him and Team Mascot.

He can also be used in tandem with Unlife of the Party and Frankentuar to give them both a boost. However, Huge-Gigantacus is not a Crazy hero, meaning he has to get them from Raiding Raptor and Bad Moon Rising first. An alternative way, if you are playing as Professor Brainstorm, is to get him from Thinking Cap or Quasar Wizard first.

Also, note that you can only play him on the Zombies Play phase and not the Zombie Tricks phase unlike other zombie superpowers without the use of Teleport or Teleportation Zombie, so he cannot block plants after the Plants Play phase and thus can be easily destroyed by tricks.

Treat this zombie like Plantern, as he becomes powerful in an environment but has

zombie by using Weed Whack on him when he is not in an environment. 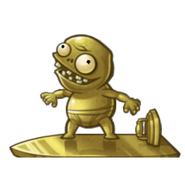 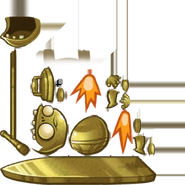 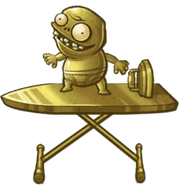 Iron Boarder's cameo as seen in a comic strip 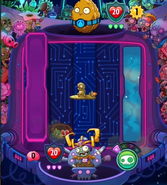 Iron Boarder in Laser Base Alpha 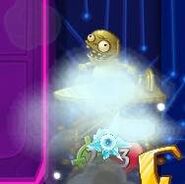 Barrel of Barrels being played on Iron Boarder

Iron Boarder with the

Iron Boarder with a star icon on his strength 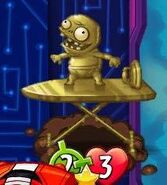 Gigantic Iron Boarder due to a glitch