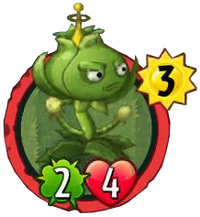 For the similar plant in Plants vs. Zombies: Garden Warfare 2, see Weed.

While in an Environment: This gets +3

.
"Call me a 'weed.' Go on. I consider it a compliment."
Invasive Species is a galactic uncommon plant card in Plants vs. Zombies Heroes and a member of the

. It does not have any traits, and its ability gives it +3

when it is in any environment.

It is based on a regular Weed from Plants vs. Zombies: Garden Warfare 2; along with some elements of a stereotypical alien, an extraterrestrial being from outside of Earth which did not originate on Earth, as seen by its raygun-like top and its animation when it is played.

Its name is based on the real meaning of invasive species, a species that is alien, or not native to an ecosystem, and whose introduction could cause harm to that ecosystem, referencing its ability. The fact that an invasive species is a species that is "alien" could reference the fact that this plant is in the Galactic Gardens set, which is full of "aliens" (plants and zombies from outer space).

Its description makes a reference to its counterpart's name in Plants vs. Zombies: Garden Warfare 2, and also the fact that "weed" is slang for an invasive plant species.

Its attack resembles the Seed Spit ability the original Weed has in Plants vs. Zombies: Garden Warfare 2.

This card is designed to work best in environments. This will give it a massive strength boost, in addition to being quite tanky, leading to great stats for a 3-sun plant. As long as Invasive Species is in an environment, it can destroy almost any zombie very easily. Still, you will need to watch out for zombie tricks.

Even better, Invasive Species itself has outstanding synergy with practically every plant environment. For example, if you play Invasive Species in Pair Pearadise, you will get another copy, resulting in 2 plants with massive stats. However, probably the easiest environment to synergize with this is Mushroom Grotto, as your opponent will not be able to override it easily in the early-game. Even if they do, the ability is still active. Therefore, each Kabloom hero must strategize to use Invasive Species' ability to their advantage, namely by including environment cards in their decks that contain Invasive Species.

Because of its flower tribe, Solar Flare can use this in tandem with Power Flower to heal her for more health, and Briar Rose to pressure her opponent so they won't hastily try to destroy it with their zombies.

The strength boost this gets from environments is dangerous, but the boost does make it vulnerable to instant-kill tricks like Rocket Science and Cut Down to Size. You can also play other instant-kill tricks like Locust Swarm, or damaging tricks like Cakesplosion. However, beware that Invasive Species only costs 3 sun and most cards effective against it tend to cost a lot more. Cards like Terrify or Sumo Wrestler also work, as they allow you to move it away from the environment, though the opponent could simply clog their empty lanes with other plants to mess with this, something the Kabloom class is usually good at. If all else fails, try to Bounce (it does not have a when played ability) or

Freeze it to stall for some time. If it is not boosted, play Rolling Stone or Weed Spray to remove it. 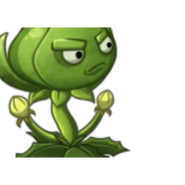 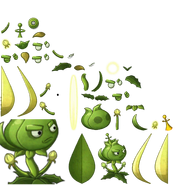 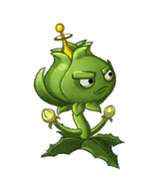 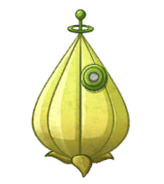 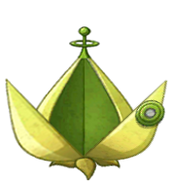 Invasive Species on the background of the Galactic Gardens battlefield

Invasive Species with the

Two Invasive Species on a lane due to Pair Pearadise's ability 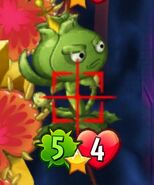