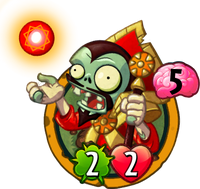 When played: For the rest of the game, all Zombies get +1

.
In space Zombie circles, he's a very powerful figure. Just don't talk about him in front of Huge-Gigantacus. There's some jealousy there.
Intergalactic Warlord is a galactic legendary zombie card in Plants vs. Zombies Heroes and a member of the

for the rest of the current match when he is played. This ability stacks for each Intergalactic Warlord played and persists until the end of the match.

He is based on a warlord, a military commander exercising civil power by force, usually a limited area. He also resembles Ming the Merciless, the main antagonist of the Flash Gordon comic strip.

In space Zombie circles, he's a very powerful figure. Just don't talk about him in front of Huge-Gigantacus. There's some jealousy there.

Despite his low stats Intergalactic Warlord's ability can be a game-changer, as it persists for the whole game once he is played, even for zombies that are normally unable to be boosted (Gravestones, cards in your hand, etc). Using this makes your zombies survive longer and do more damage to your opponent's defenses.

All Hearty Heroes can use Flag Zombie to rapidly swarm the field with cheap costing Zombies in the early game, then play Intergalactic Warlord several turns earlier than normal, which can overwhelm your opponent with permanently boosted cheap Zombies by the mid-game.

If playing as Neptuna, you can use In-Crypted, Firefighter, or Mixed-Up Gravedigger to reactivate his ability. You can also have him attack your opponent directly to boost his stats with Swashbuckler Zombie on the field, and further assist this by giving him the

Strikethrough trait with Captain Flameface, since he is also a pirate zombie.

As Rustbolt, you can combine this with Mustache Waxer to gain extra brains, or use him to Evolve Duckstache. He can also use Cryo-Brain to ramp to Intergalactic Warlord on Turn 4 or earlier. However, both uses pale in comparison to other heroes as Rustbolt can't reuse his ability.

While Intergalactic Warlord himself is no threat, his ability is very dangerous as it gives all zombies your opponent uses a boost, and cannot be prevented or countered. The best thing to do is to defeat your opponent before too many zombies get too powerful, but if you can't, the most important thing to remember when facing this zombie is to never Bounce him unless it ensures your victory, as your opponent can replay it and boost all their zombies once again.

If your opponent is Neptuna, attempt to destroy this zombie immediately - which should not be too difficult due to his low stats - As she will abuse her bouncing cards to reuse his ability otherwise. Although The Smash can also do this, it is less likely that he will be running Secret Agent. 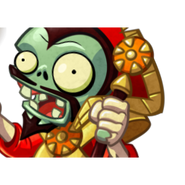 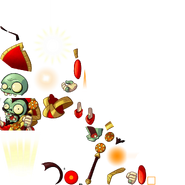 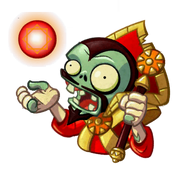 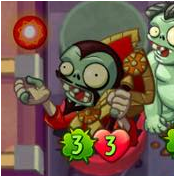 Intergalactic Warlord tinted gray due to a glitch

Gigantic Intergalactic Warlord due to a glitch 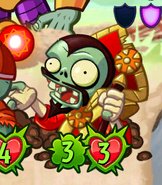 Intergalactic Warlord while Pecanolith is on the field 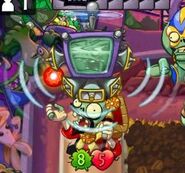 Intergalactic Warlord with the