Infinity Time is an unlockable game mode in Plants vs. Zombies: Garden Warfare 2. It is unlocked in the last quest of the single player mode of each side.

In this game mode, Crazy Dave/Dr. Zomboss sends the player to Infinity in an attempt to defeat the Gnomes and their leader, Gnomus the Gnome King. This game mode also reveals interesting facts about the Gnomes' job in controlling time.

After completing the quest, starting a new match in that mode costs at least 5 stars to start on the first wave, with every five waves beaten previously being available as a starting point at a higher cost. In this repeatable form, it can also be played with up to 3 other players, though this requires all the players to be in one of their Backyards when starting the mode.

In this mode, the player plays as an Infinite Robot (Junkasaurus for Plants, Mecha Cat for Zombies). The goal is to survive as many waves as possible until they themselves get vanquished or if their Time Stability runs out. Gnomes are the main enemy unit in this mode. The main goal is to vanquish all the Gnomes in a wave to move on to the next, with each level getting progressively harder and harder.

In this mode, health does not regenerate. To remedy this, enemies drop Time Shards when they get vanquished. Time Shards dropped by regular enemies heal the player for 50 health. Bosses drop bigger Time Shards, which will heal you for 200 HP each. All player's health will also be fully restored every five waves. The number of shards one shard is worth also increases with each quadrant cleared. They are then traded in to unlock chests when the game mode ends.

Unlike a garden or a graveyard in their respective Ops modes, the game mode has a unique health system called "Time Stability" which can be drained by Gnome Floaties. Time Stability will be fully restored every five waves.

Gnomes are the main enemy unit in this mode.

A Gnome Floatie appears randomly during waves, and will lock onto time rings to drain Time Stability if not destroyed. It is also a boss.

Giga Gnomes are bosses that require much more damage to defeat than regular Gnomes. One or more usually appear in every wave after Wave 8.

Every 5 waves, Gnomus the Gnome King sends out an Impostor King. The Kings, like the other gnomes, match the color of the current zone: the first one is Blue, then Green, Yellow, Red, and finally the 'real' King Gnomus appears at wave 25.

After Wave 25, two Gnome Kings will be sent out at once. Any Gnome King can also drain Time Stability if not attacked and is near a time ring and they also drain faster than the Floaties.

During Nemesis waves, Gardens/Tombstones will spawn an infinite number of Plants/Zombies until they are destroyed. Gnomus also calls plant/zombie reinforcements when calling the giant boss.

Singularities are electric balls that hover around the Gnomiverse board. A new color appears every x1 wave, making it tougher for the player to move around. Singularities are invincible, and going into one can drain your HP extremely fast.

Singularities never disappear, meaning by wave 41 there will be all 4 colors on the board.

Upon ending Infinity Time by either running out of health or by having all Time Stability drained, the player will be rewarded with a treasure chest based on the number of Time Shards they obtained. The more time shards the better the chest, and the higher chance of getting a good item.

Any amount below 500 will prompt Gnomus to say: "Too few Time Shards to merit a reward! Begone!" And the player will receive no chest.

Note: All Party Characters are exclusive to Infinity Time and cannot be earned otherwise (except in limited-time Infinity Packs in the Sticker Shop).

Every 5 waves King Gnomus send an Imposter King, which is a boss. It is wise to use your Cannon attack on him. Also, remember that when he gets to about a third of his health, he sends in a Massive Nemesis. You must vanquish it to finish off Gnomus. Beware, he can destabilize time so you should lure him away from the Time Rings. If he does begin to destabilize time, damage him for a few seconds and he will leave the Time Ring and focus on you instead. After losing 2/3rd of his health, the King will flee for a bit until you defeat giant versions of a plant / zombie, depending on what side you picked. Some of these giant versions can deal a lot of damage really fast, like the Giga Imp, while some will do very little if you keep your distance, like Cozmic Mayhem. They have a lot of health as well, so use your abilities to defeat them. If the King dies, every remaining enemy is also killed instantly, so its generally better to focus on taking him down quickly once he reappears.

You will meet Singularities that can hurt you starting at wave 11. You must stay away from them, as you cannot damage them. If you see one at it is near you use your Tackle to get away from it. Also keep track of where the Singularities are, as having one sneak up on you can be devastating.

An important thing you need to keep in mind is that Time Shards are your only source of health. Every Gnome only provides 50 health, and Giga-Gnomes, Floaties and bosses provide 200 health. For this reason, collecting extra shards when your health is 2000 is a waste of health. It's best to leave shards on the ground, so you can pick them up when your health gets low. All shards not collected at the end of the Gnome King fight will automatically be picked up, meaning any shards still present on the map will eventually be collected. 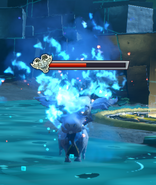 A Gargoatuar in Infinity Time 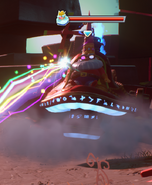 The red impostor king in action

A Giga Gnome with its giant mushroom 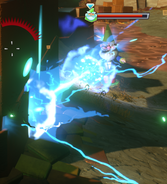 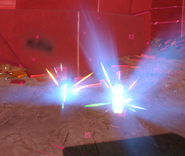 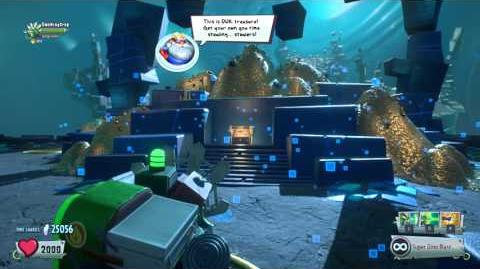 Rare glitch, after defeating a Gnome Floatie wave, Shooty Gnomes may start rapid-firing their weapons at nothing for no apparent reason
Add a photo to this gallery

Retrieved from "https://plantsvszombies.fandom.com/wiki/Infinity_Time?oldid=2364340"
Community content is available under CC-BY-SA unless otherwise noted.