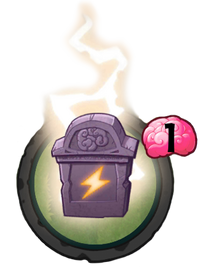 A Zombie hides in a Gravestone. Draw a card.
Requires eight characters, one upper case, a number, and the letter Z.
In-Crypted is a super-rare zombie superpower trick card in Plants vs. Zombies Heroes and a member of the

Its description references the usual "password requirements" various websites like to enforce, much to the usual frustration of a typical user. The requirement for the letter "Z" is a reference to how certain passwords require the use of specific characters, such as numbers or punctuation, and Z being a reference to this as a zombie-relevant card.

Alternatively, you can use it on a zombie in front of plants that attack twice like Repeater, Bananasaurus Rex, and Re-Peat Moss, as gravestones cannot receive damage. This tactic works best with Zombie Coach, Trash Can Zombie, Screen Door Zombie, and Zombot Battlecruiser 5000 due to their shielding ability.

Try to be aware of Grave Buster and the Block Buster, when facing a

Guardian hero. Of course, you can just choose to not play it. It is unlikely that you will face a Cool Bean + Winter Squash Combo just for a single gravestone unless the opponent is desperate.

Persistent abilities are disabled while the zombie is in the gravestone. For example, Planetary Gladiator will not take damage for the zombie hero if he is hidden.

However, you have an advantage when In-Crypted is played: since you know exactly what is in the gravestone, you can pull out the right plant to deal with that zombie, even if you are not playing as a Guardian Hero that would have access to grave-removal cards. 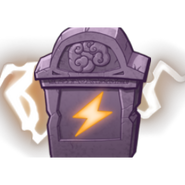 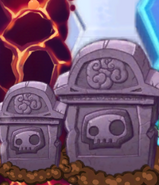 Gigantic gravestone due to In-Crypted being used on a gigantic zombie or a zombie that was shrunken by Shrinking Violet. 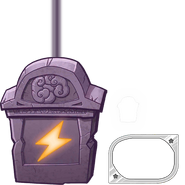