For the similar zombie in Plants vs. Zombies Heroes, see Imposter.

10 minutes
Just a few days ago Imposter Zombie strolled into the Federal Reserve and walked out with over $500 million in silver. Nobody said a thing.
Imposter Zombie was a zombie in Plants vs. Zombies Adventures. It was not actually one zombie; rather, a pair of Imps hiding under a trench coat. When their trench coat was destroyed, a squeaky voice can be heard, and the Imps jumped out and started eating the plants on their own. While inside the trench coat, the 'zombie' dealt more damage per bite, due to both Imps biting the plant at the same time.

Just a few days ago Imposter Zombie strolled into the Federal Reserve and walked out with over $500 million in silver. Nobody said a thing.

Imposter Zombie can be quite difficult to kill when coming in larger numbers, as they have quite a bit of health that is comparable to the Football Zombie. It is best to have Shamrocks attacking them and to freeze or slow them down from moving whenever possible, while using Wall-nuts to stop them from moving onwards. A Bamboo Shoot is good because it kills the Imps when the trench coat is knocked off.

In Brainball, Imposter Zombie trained waves itself is not that preferable, as Ice Block Zombie are more effective. Imposter Zombie waves come with Barrel Zombies and Rocket Zombies. Each of these are weak and one shot from a Flaming Pea will destroy a Barrel Zombie's barrel. When spawned in Mall Cop Zombie hordes, it is a good idea to let them take the hits instead of the Mall Cop Zombies. The Imps that fall out are deadly distractions, as every plant will shoot at one Imp then another, wasting a few extra seconds.

Imposter Zombie's trash' (actually Imp's trash, which is his shirt)

The two Imps that appear when the coat is knocked out 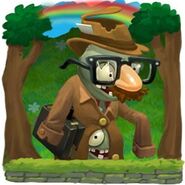 Retrieved from "https://plantsvszombies.fandom.com/wiki/Imposter_Zombie?oldid=2363283"
Community content is available under CC-BY-SA unless otherwise noted.