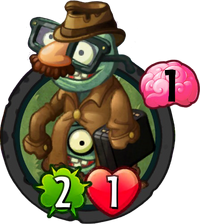 For the version in Plants vs. Zombies Adventures, see Imposter Zombie.

When destroyed: Conjure a 1

-cost Imp. It gains a Mustache.
It's IMPossible to tell who he really is.
Imposter is an event zombie card in Plants vs. Zombies Heroes and a member of the

. He does not have any traits, and his ability Conjures an Imp card that costs 1

, including another Imposter, when he is destroyed, then places a mustache on that Imp when it is played. The Conjured Imp also belongs in the mustache tribe, although it does not say that in its tribes and only says "Conjured by Imposter - Gained a Mustache." instead.

He was introduced in update 1.14.13, along with Garlic, Health-Nut, High-Voltage Currant, Banana Split, Sun-Shroom, Secret Agent, Gargantuar-Throwing Imp, and Zombie High Diver. He became craftable as of update 1.16.0.

He is based on the zombie in Plants vs. Zombies Adventures with a similar name and appearance.

It's IMPossible to tell who he really is.

Imposter can be a great addition for Imp decks, as he gives you more Imps when he is destroyed.

So far, Imposter can only give you:

Getting an Imp is the worst case scenario, as it does almost nothing, only serving as a meat shield or as a glass cannon if paired with Toxic Waste Imp or as extra cards with Imp Commander. However, all the other options you can get are decent early-game plays. Mini-Ninja has the

Anti-Hero trait, meaning he can do some good damage early in the match. Impfinity Clone is fragile, but it can act as a Snorkel Zombie with the Imp and its given Mustache tribe. Loose Cannon can do guaranteed damage to your opponent before attacking. Leprechaun Imp has decent stats and will shuffle a Pot of Gold into your deck, which is helpful if you are using an Imp deck. Neutron Imp works wonders if your deck has lots of environments in it. And finally, getting another Imposter will allow you to Conjure another Imp.

Imps with a mustache can activate Mustache Waxer's ability and be used for Duckstache's Evolution.

Having no traits or extraordinarily good stats for a 1-brain card, Impostor himself isn't much of a threat. However, you will want to watch out for Impostor's "when destroyed" ability; while the Imps may cost only 1 brain, they can cause you a bit of trouble early on if unprepared, especially with Imp Commander or Toxic Waste Imp.

Damaging abilities like Banana Bomb's and Berry Blast's are the most simple and universal answer to both Impostor and the Imp Conjured, but most attacking plants can also deal with them with little trouble. However, make sure to remove any Toxic Waste Imps first if you want to use any high-health plants, as the Imps will be