None
An IMPerfect copy, but it'll do.
Impfinity Clone is a token zombie card in Plants vs. Zombies Heroes and a member of the

Crazy classes. He can be made by Triple Threat, Impfinity's signature superpower or Imp-Throwing Imp.

. He has the Amphibious trait and does not have any abilities.

In the boss battle of the mission Impfinity's Wild Ride, Impfinity starts with an Impfinity Clone on the third lane.

He is based on, and is a clone of the zombie hero in this game with the same appearance.

His name is a combination of "Impfinity," the zombie hero that makes him, and "clone," referring to his identical appearance to Impfinity.

An IMPerfect copy, but it'll do.

Impfinity Clone is basically a Snorkel Zombie for Impfinity, but in a different tribe and class. Should he be Bounced or obtained as a card, it is recommended to take advantage of his Amphibious trait and play him on an aquatic lane.

Since Impfinity Clone is made on random lanes if Triple Threat is played, there is no guarantee of what he hits. Any synergies with Toxic Waste Imp and Imp Commander apply to him due to him being an Imp zombie.

Anything can counter him due to his lack of innate abilities and low stats. If he is played or made later in the game, Sour Grapes can instantly get rid of him on the following turn. 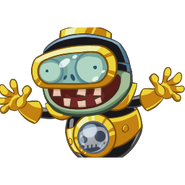 Impfinity Clone with a mustache destroyed

Jolly Holly about to activate her ability on two Impfinity Clones 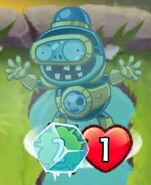 Professor Brainstorm with Impfinity Clone, only possible via Eureka 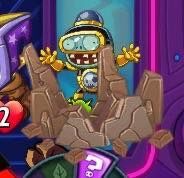 Lawnmower being played on Impfinity Clone

Squash being played on Impfinity Clone

Impfinity Clone with a mustache, due to Imposter's ability.

Frenzy trait, and a mustache attacking 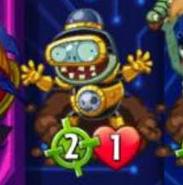 Impfinity Clone with a star icon on his strength 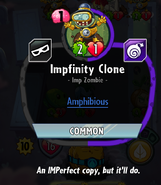