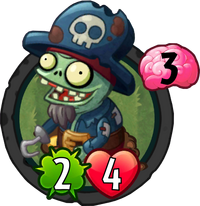 When an Imp hurts the Plant Hero, draw a card.
He's got a bit of a Napoleon Complex. Obviously.
Imp Commander is a premium rare zombie card in Plants vs. Zombies Heroes and a member of the

. He does not have any traits, and his ability draws a card every time an Imp zombie, including him, does damage to the plant hero. This ability persists until all Imp Commanders are removed from the field.

He is based on a commander (specifically, a pirate commander), a person who is in charge of something, especially an officer in charge of a particular group of a military operation.

His description mentions the term Napoleon Complex, named after Napoleon Bonaparte, which describes a theoretical condition occurring in people of short stature. This references the prominent short stature that all Imps possess, as well as the common misconception regarding Napoleon's height. In addition, it could be a nod to this zombie's hat, which bears a resemblance to Napoleon's hat.

He's got a bit of a Napoleon Complex. Obviously.

For a 3-brain zombie, Imp Commander can be quite tanky and hard to destroy. He has decent health and can fight back. However, Imp Commander's main role on the field is to set up an Imp-powered "draw engine," allowing you to quickly draw additional cards and maintain card advantage. For this to work, however, you will need to have a steady source of Imps in your hand.

Brain Freeze and Impfinity are good candidates for achieving this task: the former has Vimpire, Ancient Vimpire, and Loudmouth, three solid

Beastly Imps that can hold their own in battle and aid others (excluding Vimpire), while the latter has Imp-Throwing Gargantuar, not to mention his signature superpower which can quickly swarm the field with Imps. Neptuna can use cards such as Camel Crossing to keep this and other Imps alive, while Super Brainz and Huge-Gigantacus can Teleport in more Imps to avoid plants and use Lurch for Lunch for extra attacks.

Playing Toxic Waste Imp can really make an impact as well, as Imp Commander will get

Deadly. Hot Dog Imp, Space Cowboy, and Loose Cannon (the last example only as Impfinity) can attack your opponent directly using their

Overshoot trait, guaranteeing a card per hit unless your opponent blocks. Using Swashbuckler Zombie and Captain Flameface will also benefit greatly, as Imp Commander is also a pirate zombie. Using a combination of this and Imps can easily provide a decent strategy for any Sneaky zombie hero.

If you see this zombie on the field, destroy him quickly with a powerful plant or a trick that does 4 or more damage at once. Zapricot is arguably the best plant to play in this case, as it can be played on the same turn as him. As of tricks, Whack-a-Zombie is a good one. Additionally, try to block all lanes if there are Imps on the field so that they (except for Hot Dog Imp and Loose Cannon) cannot damage you, thus preventing Imp Commander from drawing cards.