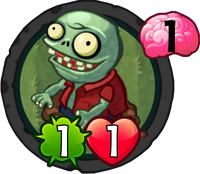 None
He's proficient in Zombie judo and Zombie karate. He also plays the Melodica.
Imp is a basic common zombie card in Plants vs. Zombies Heroes and a member of the

He is the basic zombie of the Sneaky class.

His description is a direct reference to his Suburban Almanac entry in Plants vs. Zombies.

He's proficient in Zombie judo and Zombie karate. He also plays the Melodica.

card, he should not be underestimated due to him taking benefit from Toxic Waste Imp's ability as well as activating Imp Commander's ability. However, even with

Deadly, Imp still has low health, so you should either play health boosting tricks like Camel Crossing or simply let Imp be destroyed.

Usually, Mini-Ninja and Imposter are better options, as Mini-Ninja costs the same amount of brains and has the same stats, tribes and class, but with the added benefit of being able to wear down your opponent's health quicker with his

Anti-Hero trait, while Imposter gives you another 1-brain Imp when destroyed. As Brain Freeze, you can boost him with tricks such as Vitamin Z, although it is better to save them for stronger or more potent zombies. As Super Brainz, you can make Imp with the

Deadly trait do a bonus attack, allowing him to finish off any plant aside from

Armored or shielded plants before they get to attack.

Any plant that can do damage should be sufficient in dealing with Imp. When Imp has

Deadly via Toxic Waste Imp or even Super Stench, however, you should be careful not to expose your key plants to him. In that case, plants with the

Armored trait, or tricks such as Root Wall and Peel Shield can shut him down.