Can temporarily use the powerful Z-Mech every so often

Imps are close range attackers that can be hard to hit and excel in chaos. When riding a Z-Mech, they gain more explosive weapons and better ways to deal damage.
Imp is a playable Zombie class in Plants vs. Zombies: Battle for Neighborville. He is an

Imps are close range attackers that can be hard to hit and excel in chaos. When riding a Z-Mech, they gain more explosive weapons and better ways to deal damage.

Imp's primary weapons are the Imp Blasters, which fires lasers that deal 4 damage each (5 critical) and fire at a rate of 725 RPM (rounds per minute). They can fire 56 projectiles before needing to reload.

Activating the Z-Mech takes some time, so it is advised to use the ability when you are behind cover. Using this when you are exposed will just give the enemy more time to hit you as you cannot move while calling in the Z-mech. Do the opposite when escaping the Z-mech as escaping behind cover will just waste the explosion that comes after escaping.

The Imp is good at close range combat, but Chomper or Snapdragon can easily beat him. Watch out if the imp is ejecting from the Z-mech because if you get caught in the explosion, it deals a lot of damage. Chomper's Burrow or Peashooter's Pea Suped is good for escaping the explosion. Imps are very small and fast, so it's hard to hit shots. Some ways to handle this are to equip Peashooter's homing pea upgrade or use rose as they both are homing.

-Explosive Escape (Z-Mech) and Gravity Grenade combo. This is an extremely deadly trick because it traps plants near the explosion, giving them no possible escape.

As of the May 2020 patch, there is a glitch where you can speed up the primary weapon's rate of fire if you rapidly mash the aim button while firing it. This allows you to reach higher DPS and compensate for the damage nerf in this update, at the cost of losing accuracy. 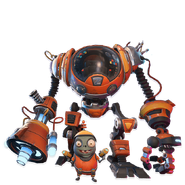 Imp and their Z-Mech's full body 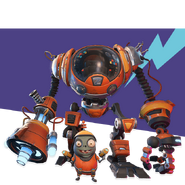 Concept model renders with the Z-Mech