For more information about this character, see Imp

Imp is considering pivoting from chaotic pranks to a philosophical life of the brainz. He saw a Zombie Chicken with a soup can stuck on its butt and wondered, "Which came first? The chicken, or the can on its butt?"
Imp is a Neighborhood Zombie in Plants vs. Zombies 3. It is one of the first few zombies you encounter when you start up the game, the others being Browncoat Zombie and Flag Zombie

It is based off of the zombie of the same name and appearance from the original game, however he is wearing shoes, to make him more look like his appearance in the sequel.

As with all previous games in the series, Imp is a weak and easy zombie to deal with. However as the game goes on in Devour Tower, it gets stronger.

He can be difficult to deal with at times, as he is faster than a Browncoat Zombie, similarily to the Power Walker. There are not many strategies with the Imp, as almost any plant in the game can take the Imp out. Just remember to keep taking care of Breakouts and getting seeds to your plants can get stronger so the Imp will not get too strong in later Devour Tower levels. 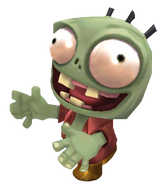