Imps are tiny zombies hurled by Gargantuars deep into your defenses.

Level 5-8
Imp may be small, but he's wiry. He's proficient in zombie judo, zombie karate, and zombie bare-knuckle brawling. He also plays the Melodica.
Imps are small fast-moving zombies that do not have much health. They are commonly thrown off the backs of Gargantuars which can quickly result in losing the level if not prepared. This is due to the fact that they get thrown into the middle of the plants and possibly at the final column. However, if they are thrown deep into their defenses, they will most likely cause quite a lot of damage if the player's defenses are not strong enough. Imps are small enough to chew on a plant with a Spikeweed or Spikerock in front of it without being damaged.

The Imp is the 24th zombie encountered in Adventure Mode. He is thrown from the back of the Gargantuar or Giga-gargantuar. In I, Zombie, regular Zombies are replaced with Imps in Three Hit Wonder and the levels after it. 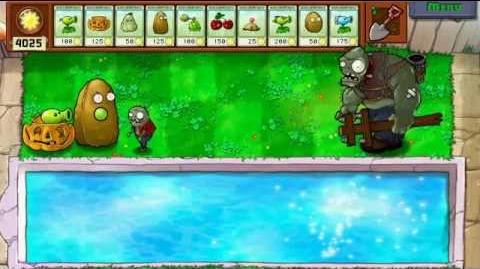 Any level with a Gargantuar, along with Three Hit Wonder, All your brainz r belong to us, and I, Zombie Endless.

When a regular Gargantuar is hit by an instant kill (but is not killed) or loses half of his health, he will throw the Imp off his back approximately five squares forward (although it can be more in Survival: Endless). Covering the back three columns of the lawn with Pumpkins is a good idea to protect against Imps. The fourth or even fifth column might need a Pumpkin as well if an instant kill is launched when the Gargantuar just walked onto the lawn. In Survival: Endless, Gloom-shrooms with a laddered Pumpkin are often used as the Imp climbs over the ladder without hurting the Pumpkin and will be killed by the Gloom-shroom. Another method is to replace the Sunflower of the last column with other plants, and the best choice is Melon-pult and Winter Melon because they can quickly kill the Imps and may also kill the Gargantuar. If there is not enough sun, replace the Sunflower with the Twin Sunflower. Using Jalapeno after the Gargantuar has thrown the Imp is a good strategy as the Jalapeno will kill the Gargantuar and the Imp in one go.

In the I, Zombie Puzzle Mode levels, although Imps can hardly withstand any damage, they're useful to send down an undefended lane to eat a Sunflower or a brain due to their speed. They can be also used to save sun, if any zombie is killed just before it eats the brain and then you use him (although he may be killed at the same time).

It is best to send an Imp down a lane that has a Potato Mine or Squash at the rightmost column in I, Zombie. An Imp can survive one Spikeweed due to his speed. Do not use the Imp if the lane has plants that can attack him, as his low health will kill the Imp and waste 50 sun.