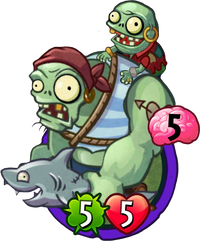 Swabbie with Amphibious in a random lane.
Seems like a better idea than a Gargantuar-Throwing Imp.
Imp-Throwing Gargantuar is a premium rare zombie card in Plants vs. Zombies Heroes and a member of the

. He does not have any traits, and his ability makes a Swabbie on a random lane every time he takes damage, unless all other lanes are occupied.

He is based on Gargantuar Pirate in Plants vs. Zombies 2.

His ability is a reference to how Gargantuars throw Imps at half health.

Seems like a better idea than a Gargantuar-Throwing Imp.

This Gargantuar is a pretty average zombie for its brain cost. However, his ability to make Swabbies when hurt can be used to block the attack of an

Anti-Hero plant, a hard-hitting plant, or an Amphibious plant, or just land 1 free damage on the plant or the plant hero. This can easily fill all lanes with Swabbies, making Zombot's Wrath and Bad Moon Rising a very good combination with this zombie. Unlife of the Party also goes great with Imp-Throwing Gargantuar. Since this zombie is a Gargantuar zombie, Smashing Gargantuar and Wizard Gargantuar can give the

Bullseye trait. Additionally, he is also a pirate zombie, so Impfinity can use this with Swashbuckler Zombie.

Since the Swabbies made have very low stats, Valkyrie and Frankentuar can be boosted greatly for each Swabbie destroyed.

Because his ability only activates when he is hurt, you should try to keep the damage done to this zombie as low as possible. Healing or boosting Imp-Throwing Gargantuar's health can also be a good idea, but only Z-Mech and Electric Boogaloo can do this. You can also play this in Spikeweed Sector or Hot Lava to make a free Swabbie before combat.

Impfinity can use this with Toxic Waste Imp and against high-health plants, as the

Deadly trait allows the Swabbies to destroy plants with one hit, provided they don't have the

Armored trait or are shielded. Just keep in mind that Imp-Throwing Gargantuar is not in the Imp tribe, but the Swabbies made are.

Against Imp-Throwing Gargantuar, the fewer number of attacks needed to destroy him, the better. A plant with 5 or more strength or more can take him out easily in one hit. Instant-kill cards like Squash and Lawnmower do not activate Imp-Throwing Gargantuar's ability, so it is useful as well. Transforming this zombie with Goatify or Transmogrify is also an option, though not the best sometimes.