For the version in Plants vs. Zombies 3, see Immorticia. 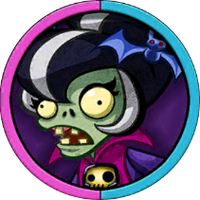 Immorticia is a zombie hero in Plants vs. Zombies Heroes and the leader of the

Beastly classes. Her signature superpower is Witch's Familiar, which makes a Zom-Bats on a selected lane.

Her design is based on a stereotypical Halloween witch, although her hair resembles that of Frankenstein's bride. She also seems to have some inspiration from Dracula due to her ability to transform into a bat.

Yes, she's a Zombie AND a witch. She believes death is too short to limit oneself.

Immorticia always has a surprise up her sleeve with a vast variety of Tricks, from growing her Zombies or destroying Plants outright!

Immorticia has a complicated class combination of Brainy and Beastly zombies. This means she has access to both bonus attacks and powerful buffing tricks.

She has access to the typical science and pet zombies, as well as powerful tricks such as Vitamin Z, Lurch for Lunch, Fun-Dead Raiser, and Hail-a-Copter. These tricks, combined with cards that grant extra brains, can make Paparazzi Zombie extremely powerful. Locust Swarm and Maniacal Laugh also have the potential to turn the tide of battle in the late game.

Immorticia has the potential to allow selected zombies to last longer than normal on the battlefield, and consequently deal more damage. A particular example is the Paparazzi Zombie, which has the greatest synergy with Vitamin Z. Playing Vitamin Z on Paparazzi gives it a massive +4

Bullseye zombies such as Pool Shark, causing devastation that her opponent cannot block. Gentleman Zombie also has great use with Immorticia, as he will allow Immorticia to play more expensive tricks early.

Frenzy. Both of these two combined will make incredible threats. However, her most deadly combo is Teleport + Zombot 1000, which will destroy all newly played plants and also make Zombot 1000 invulnerable to threats like Squash or Lawnmower. In fact, Immorticia is the only hero who can do it normally without the need of help from cards that can give off-class cards.

However, Immorticia's vast trick disposal is also her hugest downfall. Having tons of tricks is great for a deck, but can also impact it a lot. Fewer zombies can be really bad for a hand, especially in the early game. Plant cards such as Dark Matter Dragonfruit, Brainana and Forget-Me-Nuts can also put a huge dent in her strategies if used frequently. Immorticia players should not try and put every single trick in a deck, as they will clog the deck and likely make a poor deck. However, Haunting Zombie can solve this a bit, as it is a good early game tool to have with decks with minimal zombies.

Immorticia must be dealt with as early as possible. Beastly heroes need a few turns to truly begin boosting. Her Brainy class helps her do this earlier than others, provided that her important brain-granting zombies survive.

One method is to adapt to her powerful bag of tricks. Distributing buffs evenly between a large number of plants on the board will minimize the value of Locust Swarm and Rocket Science. Putting too many boosts on a single plant makes it a target for the above mentioned tricks. Rushing Immorticia with cheap, high-attack plants such as mushrooms to deal heavy damage is an example of this method.

Another option is to copy her playstyle, buffing or healing plants while preventing zombies from being buffed and removing heavily buffed zombies is effective, although the match may be in a stalemate for a long time. Outsmarting her with your own tricks is also an option, although certain plant heroes may find this method problematic, especially if they are not Smarty heroes.

Retrieved from "https://plantsvszombies.fandom.com/wiki/Immorticia?oldid=2271859"
Community content is available under CC-BY-SA unless otherwise noted.